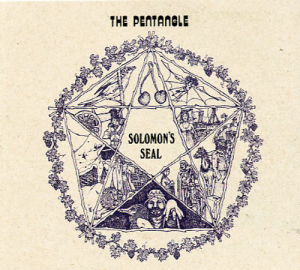 As is often the case, one of my favourite albums is one that hasn’t been favourably reviewed in some quarters. Solomon’s Seal released in 1972 was (The Pentangle) or Pentangle’s last album before they decided to split and it’s as if the band falling apart negatively influenced opinion rather than the content.

Bert Jansch’s rustic voice on an interpretation of traditional West Country songwriter Cyril Tawney’s, Sally Free And Easy opens the album, the Bluesy treatment of the opening track highlight Pentangle’s strength as they blend Folk, Jazz and Blues together..

The next three songs fit into a more traditional Folk sound with Jacqui McShee singing The Cherry Tree Carol, the second Jansch vocal on The Snows features sitar, High Germany features recorder (I think) and a stroll through a costume drama with McShee again taking the lead.

People on the Highway is a duet with McShee and Jansch and returns to more eclectic influences with McShee’s purity and Jansch’s scratchy vocal tones traveling out of Europe albeit to somewhere in the past.

Willy O’ Winsbury opens Side 2 and is traced back to 1775, variations of the song have been recorded by all your favourite Folk heroes over the years. The dealing with Kings and maidens in Folk lyrics has irked some and turns them away from the genre, perhaps in the same way as others might find banality in the Blues.

Another duet on No Love Is Sorrow and Jump Baby Jump (mostly a duet) that returns to that unique place Pentangle inhabit, mainly due to Jansch and John Renborn’s  guitars (Jansch was a major influence on Jimmy Page) and Danny Thompson’s bass playing, along with the disparate voices of McShee and Jansch in unison. The classic line-up was completed with Terry Cox on drums. Cox has played with Bowie, Elton John, Bee Gees and for 6 years with Charles Aznavour.

Jansch’s voice is so peculiar, the polar opposite to Jacqui McShee. She sings with the birds, carries tunes on the breeze and wistfully floats through the meadows like a skylark’s feather – Jansch rises from the ground, cheeks full of stones, swallowing nettles, a tongue of thistles and lips of battered acorns. The two of them are at it again on the final track, Lady Of Carlisle, somehow making their impossible blend work together as they combine unlikely elements in a chemistry that could never be surpassed in one of the great British bands of the late sixties and the early seventies.