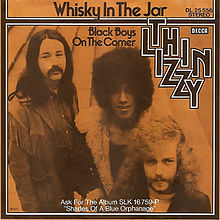 Arriving in Dublin and seeing the statue of Phil Lynott off Grafton St, Dublin’s busking walkway in the middle of town, conjures up fond memories of this charismatic and talented singer-songwriter. Born in West Bromich but brought up in Ireland from the age of three, Lynott’s tragic death at 36 in 1986 was a shocking reminder of the inability of the body to sustain continuous abuse. The biggest tragedy was the music that was never made from a life cut short.

In 1972 Thin Lizzy released their second album, Shades Of A Blue Orphanage. Whiskey In The Jar a 7 inch single, a traditional song reworked by the band and not included on the original album was released by Decca records against the bands wishes. It was their first real breakthrough, the song hit the No.1 spot in Ireland and reached No.6 on the UK chart in 1973. The line-up of Lynott, Brian Downey on drums and Eric Bell on guitar would last for one more album, Vagabonds Of The Western World released in 1973.

After Eric Bell left the band a new line-up with Scott Gorham and Brian Robertson gave the band their distinctive twin lead guitar sound. A new label, Vertigo and the album Nightlife followed in 1974, Fighting  was released in 1975 but hits remained elusive until The Boys Are Back In Town from the 1976 album Jailbreak catapulted the band into the spotlight reaching No. 1 in Ireland , No.8 in the UK and No.12 on the US chart.

RIP Phil, we miss you.