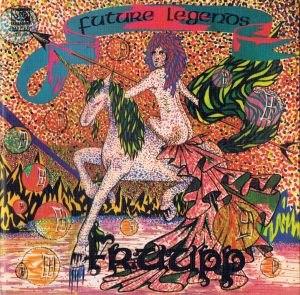 Rory Gallagher has a silent G, all those years I never knew. I also confirmed that Phil Lynott is pronounced Linott, somebody recently told me otherwise and after having it right for decades, I got it wrong last night. But at least now I know for sure.

What I also learnt last night is that  Fruupp are not known. They were from Northern Ireland where they most likely had equal anonymity. They were a Progressive Rock band best known in England where they supported both Genesis and Queen on their 1974 tours. I have all four of their albums and have posted their first, Future Legends released in 1973 here for your listening pleasure. Their music includes melodic complexity and visually, great artwork by bassist Peter Farrelly. They broke up in 1976, how you pronounce their name is another issue?