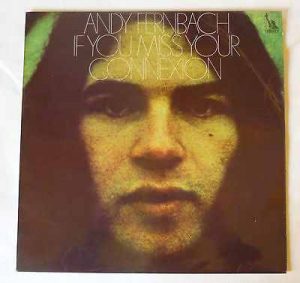 Most of the festivals I have played at recently with Anekdoten have had a good selection of Progressive Vinyl for sale, sometimes expensive original pressings otherwise more affordable reissues. Although it would be nice to have all original copies of those classic sixties and seventies albums (I do have some) often these records are just too far out of my price range. So, I content myself with reissues of famous obscurities, and more well known hard to find albums as well as buying records by artists I have never heard of.

In September I was playing in Veruno in Italy and there were many vinyl sellers to peruse before going on stage. At one stall I came across Andy Fernbach’s If You Miss Your Connexion, an unknown (to me) Blues album from 1969 and produced by Groundhogs guitarist and singer Tony McPhee. The record was limited to 500 copies and reissued on a small label called Tapestry Record based in (wait for it) Eschen in Liechtenstein. I’ve started to realize that the reissues themselves will become rarities as they are only manufactured in such small quantities and sometimes as in this case by labels based in very small countries. The record cost 15 euros and seeing that it was produced by Tony (T.S.) McPhee and Groundhogs’ drummer Ken Pustelnik and bassist Pete Cruickshank appeared on a couple of tracks it seemed worth taking a chance.

I have not been to the In Deep Music Archive’s main premises for three years. Lots of changes have kept me away until now when happily I returned from the Italian festival with the Andy Fernbach album under my arm. My travels have had me collect far too many records for the current Archive room size and they sit in storage waiting for a solution, but as my next stop after Italy was here I got to play this record soon after I arrived. I put it on the turntable and found I had bought a wonderful warm Blues Boom record from the late sixties at a time when England was the place to be in a scene that included Peter Green’s Fleetwood Mac, Stan Webb’s Chicken Shack the aforementioned Tony McPhee’s Groundhogs and many more.

I hadn’t heard of Andy Fernbach before so I thought I’d do  some research, he didn’t seem to have a Wikipedia page so I typed his name into Google. It was then that I realized…I knew him. I couldn’t believe it, I actually knew him. In the early nineties I’d partly recorded an album with All About Eve at Jacob’s studio in Surrey, it was Andy and his wife Fran that ran it. Isn’t Life Strange…but that’s another story.