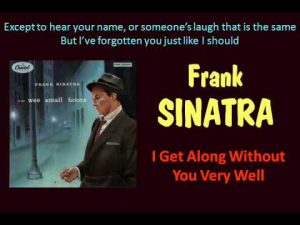 As I sit in the archive listening to the soft rain fall outside, the autumn approaching, a chill in the air, I have been playing Frank Sinatra’s beautiful 1955 album, In The Wee Small Hours. Here Sinatra sings a song from the album, I Get Along Without You Very Well (Except Sometimes), to perfection at a live concert in 1971.

The song was written by songwriting legend Hoagy Carmichael in 1939 and was based on a poem by Jane Brown Thompson who died the night before it was aired on the radio. It has been recorded many times, three times in the year of release by Dick Todd and Charlie Barnett’s orchestras as well as most successfully by marimba star Red Norvo’s orchestra with vocals by Terry Allen and and most notably by Chet Baker in 1954, although it was released after Sinatra’s version in 1956. Nina Simone, Tony Bennet, Linda Ronstadt, Billie Holiday, Matt Monro, Peggy Lee, Dinah Shore, Mel Tormé, Frankie Lane, Carly Simon, Diana Krall, June Christy and even The Durutti Column have recorded the song.

Here, Sinatra calls it a “song for losers” perfectly capturing the despair in the lyrics in this effortless performance of a Nelson Riddle arrangement. He was 56 years old here and about to retire before returning to the spotlight two years later. One is reminded not only of his talent but also by the strength of his material.

What a guy, what a fool am I
To think my breaking heart could kid the moon
What’s in store, should I phone once more?
No, it’s best that I stick to my tune

I get along without you very well
Of course I do
Except perhaps in spring, but I should
Never think of spring
For that would surely break my heart in two