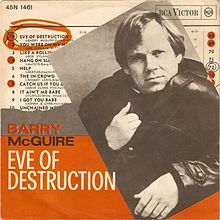 In the sixties the protest song became the voice of a generation that had become disillusioned by the direction of their government. The trusted elders were supposed to know best but this generation challenged them to justify their actions. Initially, the folk movement was considered the strongest voice in challenging the status quo. Bob Dylan, Joan Baez, Phil Ochs might be some of the most popular names associated with taking the powers that be to task but it’s hard to top songwriter P.F. Sloan’s Eve of Destruction as performed by Barry McGuire.

Eve Of Destruction was a US No.1 single in 1965 (the same year as Donovan’s rendition of Buffy Sainte-Marie’s Universal Soldier). These were the days when a lyric like this was considered unpatriotic. Certain stations wouldn’t play it, others restricted it’s air time. There was even an ‘answer song’ released by The Spokesmen, (hear the song and read the lyrics below).  The Spokesmen were a trio –  John Medora, David White and Ray Gilmore. When you read the lyrics to their song, Dawn Of Correction you realize that the revolution in the Sixties was only just beginning.

Medora, White and Arthur Singer had written Danny And The Juniors No.1 1958 single At The Hop. Sixties fans will remember Len Barry’s 123 co-written with Medora and White, the song reached No.2 in the US and No.3 in the UK in 1965. Lesley Gore recorded You Don’t Own Me, her second biggest song after It’s My Party and a No.1 single in Australia.

P.F. Sloan was a successful songwriter in his own right – Herman’s Hermits’ A Must To Avoid made it to No.8 in the US in 1966. Secret Agent Man gave Johnny Rivers a No.3 hit in the US in the same year. There’s too many hit songs written by Sloan to mention here but click on his link for his interesting musical history and note that he also had a parallel solo career. Contemporary singer Rumer recorded Jimmy Webb’s 1970 song called P.F. Sloan in 2012. It was also covered by The Association, Jennifer Warnes and Unicorn. Dave Gilmour fans will be aware that There’s No Way Out Of Here a track on his debut solo album released in 1975, is a Unicorn song.

A last odd note you might enjoy – this from Wikipedia:

“While Sloan’s insistence on becoming a recording artist was an inspiration to fellow songwriter Webb, who had worked with Sloan with Bones Howe and The 5th Dimension, a personal dispute led Webb to deny the existence of “P.F. Sloan” when asked about the song’s title character during an article interview, saying that he had made the name up. Eugene Landy, laid claim to being the real P.F. Sloan when he was asked by reporters why he considered himself able to direct Brian Wilson’s musical career. Landy claimed to have written the songs attributed to “P.F. Sloan”.

The eastern world it is exploding
Violence flarin’, bullets loadin’
You’re old enough to kill but not for votin’
You don’t believe in war but what’s that gun you’re totin’
And even the Jordan River has bodies floatin’

Don’t you understand what I’m trying to say?
Can’t you feel the fears I’m feeling today?
If the button is pushed there’s no running away
There’ll be no one to save with the world in a grave
Take a look around you boy
It’s bound to scare you boy

Yeah my blood’s so mad, feels like coagulatin’
I’m sitting here just contemplatin’
I can’t twist the truth, it knows no regulation
And a handful of senators don’t pass legislation
And marches alone can’t bring integration
When human respect is disintegratin’
This whole crazy world is just too frustratin’

Ah think of all the hate there is in Red China
Then take a look around to Selma, Alabama
You may leave here for four days in space
But when you return it’s the same old place
The pounding of the drums the pride and disgrace
You can bury your dead but don’t leave a trace
Hate your next-door neighbor but don’t forget to say grace

The western world has a common dedication
To keep free people from Red domination
And maybe you can’t vote, boy, but man your battle stations
Or there’ll be no need for votin’ in future generations

There are buttons to push in two mighty nations
But who’s crazy enough to risk annihilation?
The buttons are there to ensure negotiation
So don’t be afraid, boy, it’s our only salvation

You tell me that marches won’t bring integration
But look what it’s done for the voter registration
Be thankful our country allows demonstrations
Instead of condemnin’, make some recommendations
I don’t understand the cause of your aggravation
You mean to tell me, boy, it’s not a better situation?