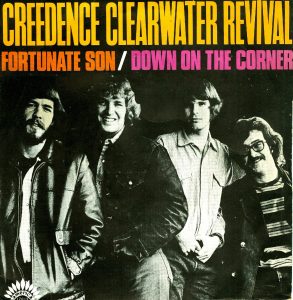 Today’s politically themed song was written by John Fogerty in the Vietnam war era in response to the marriage of David Eisenhower to Julie Nixon in 1968 – the grandson of President Dwight D. Eisenhower and the daughter of President Richard Nixon. It pointed out that non of the people born into the political elite were likely to be sent to fight whilst the warmongering politicians sent other less fortunate sons to fight in their place.

The Vietnam war’s casualty list is a sorry account of a pointless proxy war between the ideology of communism and capitalism with 60,000 US soldiers losing their lives – the Vietnamese casualties are estimated at 800,000.

Fortunate Son was the opening track on Side 2 of CCR’s fourth album Willy And The Poor Boys – making it to No.14 as a song in its own right and No.3 as a double A Side with Down On The Corner.

Creedence Clearwater Revival were massively successful but broke up in acrimony. Lawsuits with the label and court cases ruined an inspired musical history. Stu Cook, bassist and Doug Clifford, drums, carried on working together after the band’s demise but John Fogerty’s brother Tom, the band’s rhythm guitarist, died of an AIDS related disease after an infected blood transfusion.

John Fogerty refused to play CCR songs for years and went onto release The Blue Ridge Rangers, an album of Country and Gospel covers in 1973.  An album under his own name only made it to No.78 but in 1985 Centerfield became a US No.1 album. A follow up, Eye Of The Zombie, released in 1986, reached No.26 on the US chart. Other albums followed in the nineties and into the next century but nothing surpassed the classic raw swamp sound of CCR’s sixties and seventies albums and John Fogerty’s growling voice and Rickenbacker guitar.

Some folks are born made to wave the flag
Ooh, they’re red, white and blue
And when the band plays “Hail to the chief”
Ooh, they point the cannon at you, Lord

Some folks are born silver spoon in hand
Lord, don’t they help themselves, oh
But when the taxman comes to the door
Lord, the house looks like a rummage sale, yes

Yeah, yeah
Some folks inherit star spangled eyes
Ooh, they send you down to war, Lord
And when you ask them, “How much should we give?”
Ooh, they only answer More! more! more! y’all