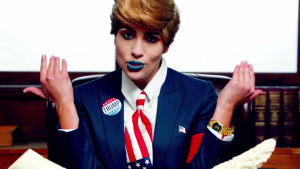 Taking the train into London today, standing at the station near the newsstand in Leighton Buzzard, I read a headline on the front page of a random newspaper “Neck and Neck”. It was of course a reaction to the news that Clinton has lost her 12 point lead because of the FBI investigating her E Mails – it’s also a collaboration between Mark Knopfler and Chet Atkins.

I thought to myself how can America come up with two candidates that each side hates. Shouldn’t it be –  I prefer the candidate I am voting for because of their more coherent vision, their empathy, their wisdom, their strategies, their ideas? For all the worth of the loser, he/she also has something inspiring and convincing to offer, but my candidate seems the better choice. Is this scenario too much to ask? Or have we entered a new dark ages?

Two Pussy Riot members were famously jailed in Russia for their anti-Putin protest in a church that saw Nadja Tolokonnikova and Maria Alyokhina incarcerated for two years, charged with Hooliganism, motivated by religious hatred. If you punch in Pussy Riot in the search window several posts appear regarding the band’s problems.

In regards to the video and to whom it is directed, why not Make America Great Again by offering the electorate respected and amazing people to vote for. Why is that so hard?