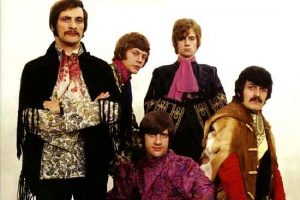 What a strange and uncomfortable 20 minutes this is for The Moody Blues but it’s more an example of how differently things were done in the sixties. The awkwardness is rather painful as the variety show concept clashes with musicians trying to get their music across. “Who agreed to do this?” You can hear them asking back stage, if there was a backstage. The struggle with sound, the uneasy atmosphere, the clumsy presenter, the song introductions (rather like the awkward Beatles clips) and all with those sweet Birmingham accents lurking in the background. “We’re all dwarves really”.

At this point The Moody Blues were in their second incarnation with singer/guitarist Denny Laine and bass player Clint Warwick replaced by Justin Hayward and John Lodge. Drummer Graeme Edge is actually the only original member of the band although flautist Ray Thomas and Keyboard player Mike Pinder were also on the first album. This line up made an unbelievable seven amazing albums between 1967 and 1972 before taking time off from the band for solo projects and general rest from touring. Getting back together for Octave – Pinder left in 1978 before a planned tour bringing in Swiss keyboard player Patrick Moraz from Yes, he stayed with the band till 1990. Ray Thomas decided to retire in 2002 but The Moody Blues continue with Hayward, Lodge and Edge the legacy of their classic albums as strong as ever.