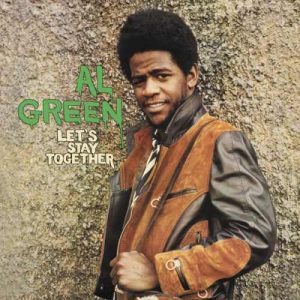 Rather unexpectedly, one of the first lessons in my ‘Guitar Guidance sessions’ involves one simple suggestion, that is – Go listen to Al Green. Whether it be one of his more well known songs – Let’s Stay Together, Tired Of Being Alone, Take Me To The River or I’m Still In Love With You, or a lesser known album track,  Al Green epitomizes ‘Feel’ and for me that’s what it’s all about.

The Reverend Al Green was born in Arkansas in 1946 and released his first album Back Up Train (spelling his name Al Greene) in 1967. In 1969 he began his collaboration with producer Willie Mitchell including Let’s Stay Together his fourth album in 1972. It was in this period that Mitchell helped make Green and his band one of the greatest Soul acts of the day with a series of American hits and Gold albums.

With the new Noctorum album recording beginning tomorrow and four Guitar Guidance sessions over the weekend, archive posts may be sporadic but I will try my best to keep them coming. In the meantime listen to the hi-hat in I’m Still In Love With You (it’s Al Jackson Jr) and you won’t want to hear anything else for days anyway. Along with Mitchell, Jackson is also credited with writing these magnificent soul classics.