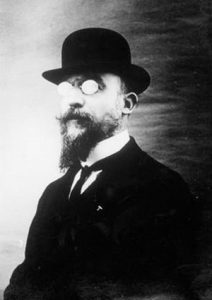 It’s 100 years since Dada appeared in Zurich at Cabaret Voltaire, making a massive impression with the cognosenti before disappearing and leaving an idea that would influence the art world forevermore. In this period pianist, composer and wit, Erik Satie roamed the streets of Paris with an eccentric air, like the Dadists contributing radical ideas to the rules of music as well as how to live. All these thinkers created a kind of anti-art that Pop Art was later to be inspired by.

Erik Satie was born in Normandy in 1866, he moved to Paris when he was four years old and died there in 1925 of cirrhosis of the liver. I have read that after his death when, his apartment was opened up, they found that his post was never opened, there were scores of umbrellas, two grand pianos sitting on top of each other and a wardrobe of identical velvet suits. He hadn’t let anybody in for 27 years.

His most famous compositions are Gymnopédies (1888), Gnossiennes  (1889–97). He also wrote the ballet Parade (1916) with Jean Cocteau including a set design by Pablo Picasso with choreography by Léonide Massine and the orchestra conducted by Ernest Ansermet prompting writer and critic Guillaume Apollinaire to coin the phrase “Surrealism”.

Satie also had an odd hobby, he drew imaginary metal building on little cards that he stored in a filing cabinet. Sometimes he put anonymous small ads in local papers, making them available to rent.

You can read all about Dada and/or Saties’s fascinating life on the net via the links below or you can just listen to his mediative, simplistic, minimalist compositions and drift away. 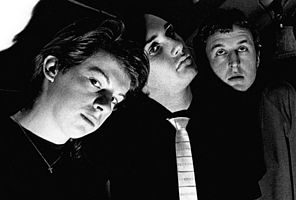