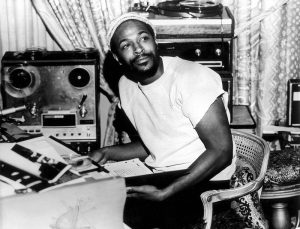 Marvin Gaye’s wonderful, melodic, lyrically powerful, socially conscious 1971 album, What’s Going On, spawned three American Top Ten singles, the title track reaching No.2. The song was written by Gaye, Al Cleveland and Renaldo “Obie” Benson. Benson was the bass voice in The Four Tops, Cleveland was a Motown songwriter that co-wrote I Second That Emotion with Smokey Robinson. The musicians were the famous in house Motowm band, The Funk Brothers. It was produced by Marvin himself and was inspired by an incident of police brutality witnessed by Benson

The story is that when Berry Gordy, Motown Boss heard it, he hated it. It went on to sell 2 million copies. It also spawned an answer song by Sly And The Family Stone, “What’s Going On” asked Marvin, Sly Responded “There’s A Riot Going on”.

If you don’t own this album, you know what you must do tomorrow.

Father, father
We don’t need to escalate
You see, war is not the answer
For only love can conquer hate
You know we’ve got to find a way
To bring some lovin’ here today, oh oh oh

Picket lines and picket signs
Don’t punish me with brutality
Talk to me, so you can see

Mother, mother, everybody thinks we’re wrong
Oh, but who are they to judge us
Simply ’cause our hair is long
Oh, you know we’ve got to find a way
To bring some understanding here today
Oh oh oh

Below there’s a lovely video of Marvin Gaye playing it live in 1972. The song is interspresed with some very cool video footage.