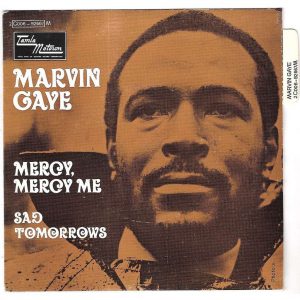 What could be a more political day than the day in 1605 that Guy Fawkes tried to blow up the Houses of Parliament. Queen Elizabeth 1 had died and the Catholics were getting tired of their persecution. James 1st became King and continued to treat the Catholics equally badly, Guy Fawkes decided to put an end to the oppression. Fawkes was betrayed, he was captured, tortured and executed.

Back here in music land, Marvin Gaye, way ahead of his time, released  Mercy Mercy Me as the second single from his 1971 album, What’s Going On.  It was a song about the destruction of the environment, a subject that’s constantly being discussed in the world today – but not so much then.

It’s a beautiful song with powerful words describing the disaster of the poisoned Earth. The song reached No. 4 on the US chart and was the second single from the album to sell over a million copies.

If you simply didn’t believe that climate change was happening, wouldn’t you still err on the side of caution instead of denying it completely and ignoring the possibility that it might be true? If I said to you, put your hand in this box, my expert friend here says that something is going to bite you, another expert says nothing will bite you. If you do it, you’ll either get 1000 pounds or lose a finger, what would you do?

The video below was released by Motown in 1991 and featured celebrities of the day getting behind the problem as the level of discussion about climate change increased.

Ah, mercy, mercy me,
Ah, things ain’t what they used to be, no, no.
Where did all the blue skies go?
Poison is the wind that blows from the north and south and east.

Mercy, mercy me,
Ah, things ain’t what they used to be, no, no.
Oil wasted on the ocean and upon
Our seas fish full of mercury,

Oh, mercy, mercy me.
Ah, things ain’t what they used to be, no, no, no.
Radiation underground and in the sky;
Animals and birds who live near by are dying.

Oh, mercy, mercy me.
Ah, things ain’t what they used to be.
What about this over crowded land?
How much more abuse from man can she stand?