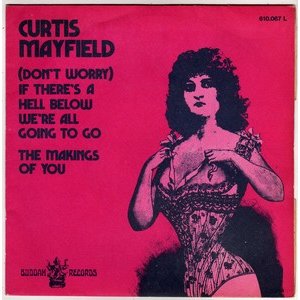 So today is the day of the US election 2016 – we have finally arrived. We are all scared to death at both who will be the winner and who will be the loser  –  what it means for a society that is so split ideologically and that whatever the result,  tens of millions of people are going to be angry. Can the mighty torch of democracy pull us through.

It’s an appropriate song title in the post today as this political thread has wound it’s way to its conclusion over the last few weeks. The great Curtis Mayfield released his debut album, the magnificent, mind blowing, masterpiece that is Curtis, in 1970. Brimming over with compassion, protest and social comment, Funk and Soul, melodic singing and memorable songs, this album is a classic of its era.

(Don’t Worry) If There’s A Hell Below We’re All Going To Go, was released as a single in November 1970 and reached No.29 on the US chart. Considered to be that most wonderful of Genres – Psychedelic Soul, the way that the sounds of counter culture of the sixties crossed over into the honeyed singing and the lyrical desperation of the Black artists with something to say about the political situation on the streets, recorded with wah-wah and fuzz guitars  brass and strings – it’s an eargasm to behold.

Sisters, brothers and the whities
Blacks and the crackers
Police and their backers
They’re all political actors

Hurry
People running from their worries
While the judge and the juries
Dictate the law that’s partly flaw
Cat calling, love balling, fussing and cussing
Top billing now is killing
For peace no-one is willing
Kind of make you get that feeling