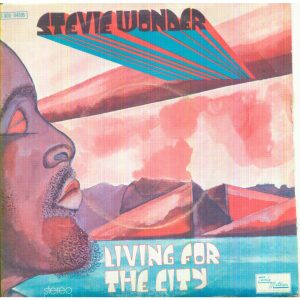 In 1973, Stevie Wonder released two classic albums, signaling a major breakthrough artistically and commercially. His last major success was as Little Stevie Wonder releasing the single, Fingertips that reached No.1 on the US charts in 1963. Previous albums had crossed over as he evolved from the young blind wonder kid to the talented young man and he had charted well but Talking Book And Innervisons, Wonder’s 16th and 17th studio albums, captured the public’s imagination – at this point he was just 23 years old.

The lead single from Talking Book was the classic Superstition, a US No.1 single. You Are The Sunshine Of My Life also went to No.1. Then came Higher Ground (No.4), the first single from the upcoming and second album of the year, Innervisions. Next it was  Living In TheCity reaching No.8  and Don’t You Worry ‘Bout A Thing reached No.16. He’s Misstra Know It All (topically about Richard Nixon) failed to chart in the US but made it to the Top.10 in the UK.

Prolific talented and with a social conscience, Wonder wrote the songs and played most of the instruments. He was now a household name selling records all over the world. It was difficult to remember that he was actually blind.

This is what he said about Trump:

“A vote for Trump is like asking me to drive”

A boy is born in hard time Mississippi
Surrounded by four walls that ain’t so pretty
His parents give him love and affection
To keep him strong moving in the right direction
Living just enough, just enough for the city

His father works some days for fourteen hours
And you can bet he barely makes a dollar
His mother goes to scrub the floors for many
And you’d best believe she hardly gets a penny
Living just enough, just enough for the city yeah

His sister’s black but she is sho ’nuff pretty
Her skirt is short but Lord her legs are sturdy
To walk to school she’s got to get up early
Her clothes are old but never are they dirty
Living just enough, just enough for the city

Her brother’s smart he’s got more sense than many
His patience’s long but soon he won’t have any
To find a job is like a haystack needle
‘Cause where he lives they don’t use colored people
Living just enough, just enough for the city

Living just enough for the city

His hair is long, his feet are hard and gritty
He spends his life walking the streets of New York City
He’s almost dead from breathing in air pollution
He tried to vote but to him there’s no solution