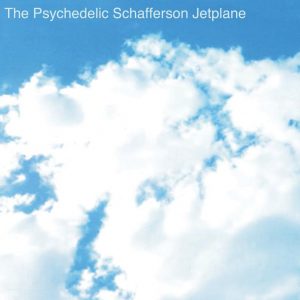 A more contemporary Chilean sound than more recent posts although The Psychedelic Schafferson Jetplane’s influences are firmly rooted in the past. Interestingly they live in different pasts as they recall a more recent past with England’s Spaceman 3 and a distant past that takes them to the end of America in the sixties, occasionally resurfacing in Germany in the seventies listening at the door of Neu’s shed.

What do we know about this band? Apparently nothing more that it’s a Chilean project with the main man living in Germany. I don’t know his name or whether there is an actual band and so I have simply added the sleeve notes to this post as information is scarce. Although the record is apparently purely analog recorded on quarter inch 16 track, on this audio You Tube version, something untoward happens digitally between 28.34 and 29.00 and with this kind of groove jamming and rhythms one can imagine that all ideas are relevant although in this case it sounds like a digital upload glitch.

Soothing instrumental, Psychedelic ambient records like this one make for an odd sonic relaxation. Contradictions that are hard to explain inhabit the soundscapes as pneumatic drills compliment gongs and mellow organs without disturbing the peace.

Highly recommended and if you don’t believe me, believe Anton from BJM.

“I think it’s one of the best psychedelic blues records ever” Anton Newcombe.

Tracks containing ambient sound (field recordings) were recorded simultaneously to the sounds in open areas and not by adding them pre-recorded or samples sounds.

We are proud to say that no digital technology was used to make this record. Considering the ultra low availability of analog technology in these digital times (like the so digital album art ;), we have sacrificed everything else to offer you a completely analog record.

This album is dedicated to Hugo Chavez Smith