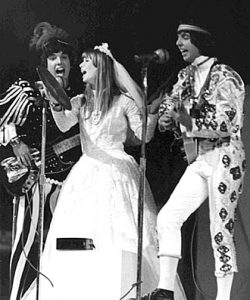 Today, January 31st 2017, Olivia and I are in Buenos Aires for a day staying at El Sol hostel run by Paul Gallinato with whom we just sat in the foyer playing a version of Big Star’s Thirteen (with Paul on bass) – the unexpected highs of traveling. Although we will be back here soon playing a show somewhere in Buenos Aires, today we will take a 17 hour bus journey to the Argentine/Brazilian border close to Paraguay. Leaving computers and musical instruments behind and this post of Os Mutantes (The Mutants) the legendary Brazilian eccentric Tropicália musical group featuring Rita Lee dressed as a bride and brothers Arnaldo Dias and Sérgio Dias Baptista to coincide with our arrival in Foz Do Iguacu on Wednesday, 1st February.

Like a bizarre mixture of Syd Barrett, Frank Zappa and Incredible String Band, here they are playing with an orchestra in a bizarre arrangement of a song sung in English. I saw them live in recent years and have been circling their records since discovering them, like all record collectors, whilst adventuring into the realm of obscure classics from around the world.

I will be unable to post for the first ten days of this month as I will be exploring one of the natural wonders of the world, the Iguazu Falls. For me this is a dream come true, back in reality my musical heroes are leaving Earth at a rapid rate – four  drummers, the loss of CAN’s Jaki Liebezeit is devastating to me, Spooky Tooth’s Mike Kellie with whom I had a wonderful chat back in the seventies when I hosted The Only Ones as the night porter in a Manchester hotel (now there’s a story) and the terrible news that Allman Brothers founder Butch Trucks had committed suicide. I saw The Allman Brothers at an Indian reservation in the States and it was one of the most soulful concerts I have ever experienced. Also Gil Ray, friend of friends and drummer for Game Theory and The Rain Parade. Three bass players, Mott The Hoople’s Overend Watts, John Wetton and of course the loss of Wetton’s wonderful voice and Björn Thelin, bassist for ground breaking Swedish space age twangy futurists The Spotnicks. Maggie Roche from The Roches, whose records I have had for many years. Nigerian singer/songwriter William Onyeabor and Peter Sarstedt, whose Where Do You Go To My Lovely is branded on my brain as a sixties classic. Last but not least and not including all the musicians that have passed away that have lesser profiles, Buddy Greco whose The Lady Is A Tramp was featured in the archive last week.

So sadness in the world, deaths of musical heroes, sadness in the world politically as it seems we are in one of the greatest examples of misunderstanding in the modern era. Polarising opinions, friends falling out over different viewpoints and insecurity destroying what should be fruitful and endless partnerships. We are all such fragile creatures and one day like our heroes, like our family and close friends we will be exiting the planet for the great archive in the sky. Be inspired by music, it’s through the visions of our creative heroes that we understand the world better. Love music, listen to the words – or maybe you just wanna dance?

Creativity is the greatest gift, being able to invent a whole world of your own, capturing melodies and adding words of wisdom for the audience to contemplate, encourage it in others, find it in yourself. All I have is music and my desire to share what I create with the world, this and teaching through my guitar and songwriting guidance project – sharing what I know with others trying to help players and writers evolve into better versions of themselves. Sharing my immense record collection, constantly listening, finding new inspiration in the work of others. In a terrible world I am amongst the luckiest people on the planet.