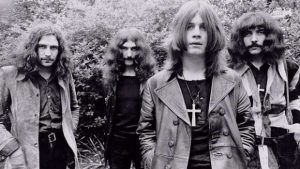 When I tell people I saw Black Sabbath on the Volume 4 tour at Liverpool stadium in the seventies, I realize that I must be at least 59 this year and am therefore lucky enough to be old enough to have been there to witness such an event. In my dreams I am stuck at 25 from 1945 till 1995, the perfect age to experience all those eras of music. I would of course have to be aware that the musical evolutions and revolutions were happening around me, have a 25 year old body and an old wise brain laced with youthful venom and vigour. Unfortunately I was still too young and or unaware to have bought the self titled Sabbath debut in 1970, the one with the creepy, evocative witchy cover, interestingly that same year they also released their second album – they were prolific, creative, imaginative, driven. If you mentioned Black Sabbath in the eighties you were condemned to the lower echelons of musical taste whilst Thompson Twins oozed out of the tele and showed us how it was done. At that time, as far as contemporary music was concerned, I was in love with Cocteau Twins, This Mortal Coil, Echo, David Sylvian and The Teardrops etc etc (you get the picture) – off on an altogether different musical adventure.

But in Rockland, Black Sabbath were trying desperately to survive despite having lost their much loved lead singer in the late seventies. Ozzy was gone into solo artist land and Elf’s and Rainbow’s Ronnie James Dio was his replacement – one might argue that Heaven And Hell (1980) is a better album than Ozzy’s last effort with the band, Never Say Die (1978) but Dio only stayed for one more album, Mob Rules (1981). With the announcement that ex Deep Purple legend Ian Gillan would take over for Born Again (1983), the Rock community held it’s breath, but the album was simply underwhelming. Glenn Hughes, one of Gillan’s Deep Purple replacements stepped in for Seventh Star (1986) before they settled on Tony Martin for The Eternal Idol (1987) Headless Cross (1989) and Tyr (1990) – Dio returning inbetween for one album, Dehumanizer (1992). Martin was back for Cross Purposes (1994) and Forbidden (1995). The glory days of the seventies albums were long gone – the songs, the sounds, it just wasn’t the same, they were creatively dead and only the die-hards, the loyal metal heads cared withTony Iommi the only original member, finally giving up the ghost in 1995 as talk of original band reunions became real. Eventually Sabbath did make that reunion album with Ozzy and Geezer Butler 13 (2013) but unfortunately Bill Ward, the band’s original drummer, couldn’t come to an agreement with the other three.

But what was it about the eighties that seemed to shake the foundation of many of the great seventies artists. Technology and hairstyles? Great talents from Robert Plant to Joni Mitchell were making terrible sounding, confused albums, in the name of what? Progress? In the early nineties Nirvana appeared, rough as guts, name checking classic Sabbath as a major influence and suddenly they were cool again even if they had struggled creatively since Ozzy quit. Even Swedish cute-cool Indie darlings, The Cardigans, did a cover of Sabbath Bloody Sabbath on their 1994 debut album Emmerdale.

In 2016 I was in Stockholm and I saw one of the shows from their final tour. The place was too big, Ozzy struggled and it was only because they played a few of the old classics that the night was a success. Tony Iommi’s inventive guitar playing still commanded attention as you pondered his ongoing sickness. Iron Man was tragic and Bill Ward’s absence gave you the feeling that the true tragedy was their inability to find a way to make the classic line up appear one last time to rekindle that golden era.

The worst thing for me is that great bands (like The Stones) seem to forget how to be great. In Black Sabbath’s case it was just five years of greatness, the heavy razor guitar, thundering bass, pummelled drums and distinctive, characterful and melodic vocals. Ironically it was Ozzy that rendered them harmless despite biting the head off a bat, the inverted crosses and the society threatening satanic name – that one in a million sweet sound that came out of Ozzy’s throat made them all the more loveable. Add the tortured guitar and a rhythm section from hell and you have one of Rock’s great bands and that’s all that anybody ever wanted –  because all that baby sacrificing was always so messy.