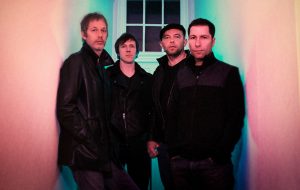 Ride return with two new songs, their first since 1996’s Tarantula (excluding the Coming Up For Air EP recorded for Channel 4). The as yet untitled album was produced by Erol Alkan and will be released by Wichita recordings in the summer.

Home Is A Feeling is dominated by harmonies and reverb guitars landing in the present from a distant past, a Psychedelic Shoegaze from the Oxford Summer Of Love, everything is in slow motion, dandelions and vaseline lenses.

Charm Assault, sounds like a song that used to be a hit – uptempo, catchy – Top Of The Pops in the eighties or the sixties with no hope now but all fans of the genre will love this. It’s way ahead of any project band members have been involved in since the band split up. Positive expectations for the new album.