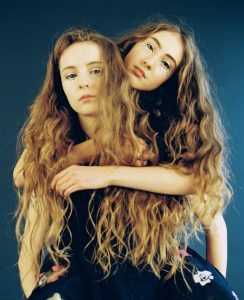 By now probably close to 18 years old, Rosa and Jenny, the two best friends of Laa-Laa and Tinky Winky, released their album I, Gemini last year having conceived it, written it, recorded it when they were 15. But if like me you found Teletubbies to be nothing less than Psychedelic you will find these two girls nothing less than inspiring.

Playful, creative, melodic, experimental, imaginative, they take Joanna Newsom with the ghosts of Caroline Crawley and Syd Barrett out to lunch down the rabbit hole meeting Björk at a Daisy Chainsaw gig attended by The Cranes and the Queen of Hearts.

The press went all gushy and hailed them the sound of the future whereas to me they sound more like they might have fitted neatly into a surreal parallel universe inhabited by Peter Gabriel’s Genesis visions, or perhaps the clear madness of Twink or Skip Spence on Oar. Not perhaps musically but mentally.

However you view these two, if you think they’re weird then you are weird. They are normal young creative kids, like all kids of that age should be. Their whole schtick makes complete sense and let’s just pray that these two talented multi-instrumentalists with brilliant hair keep messing with their listeners’ minds purely for their own entertainment.

Oh, their name – the perils of misplaced punctuation!?