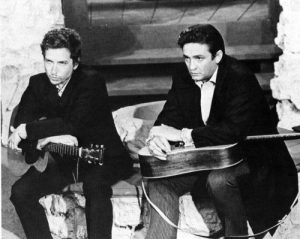 Originally appearing on Bob Dylan’s second solo album The Freewheelin’ Bob Dylan released in 1963, he re-recorded the track as a duet with Johnny Cash and opened his 1969 album Nashville Skyline with the song.

Although it starts off so well, the recorded version sounds like they were relying heavily on their legend to perfom the song for them as they stumbled through the ending, singing together like two janitors and an empty bottle of vodka in a cellar on new years eve. Too famous to rehearse? Too brilliant to do a bad job? Too legendary for criticism? Or perfect? I love them both – deeply, but did someone find it hard to say – you know guys, you might want to do the end again? Or was preserving the moment as it happened its genius? The Johnny Cash Show version almost has them listening to each other’s singing, but not their playing.

Let me know what you think? Sacred cow or magic?