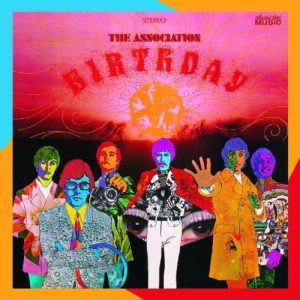 The Association were that strange and wonderful beast – Middle Of The Road Psychedelic Easy Listening Pop Folk. A splinter group that began as a loose collective called The Inner Tubes before becoming house band at sixties LA Folk hot spot The Troubadour with a floating line up of around thirteen, called The Men. The Association were the remains of The Men after they broke up. They were managed by Doug Weston, owner of The Troubadour and were the first band on the bill at the Monterey Pop Festival.

I read that their song Never My Love (1967) was the second most played song on American radio in the 20th century –  I don’t know what was the first. They are one of those bands that seem completely forgotten despite seven studio albums, a Greatest Hits, a  double live album, a soundtrack and at least three million-selling singles. Exceptional harmonies and probably overly sincere lyrics, without any rough edges, quintessentially sixties sounding, in a changing world they didn’t translate easily into the seventies, as they took on more of an R&B sound and headed for the future nostalgia circuit- fifty years later they are still together.

The song that I remember from being a kid was Windy (1967), written by folky Ruthann Friedman and The Association’s second No.1 single after Cherish in 1966. Although you might be familiar with their first single Babe I’m Going To Leave You released in 1965 and recorded by Led Zeppelin on their debut released in 1969. Written by Anne Bredon as Anne Johannsen and recorded by Joan Baez on her In Concert Part 1 album from 1962 where Jimmy Page heard it after Baez had heard it from another folkie Janet Smith. It was always credited as a traditional song and on Led Zep 1 was credited as “Trad. Page” although Breddon had written it in the late fifties. Then there’s The Plebs’ version and the Mark Wynter version. Eventually a cash settlement from Led Zeppelin and a new credit on records released from the eighties onwards corrected the crediting issue where most of the money had been made, although Baez sold tons of records in the sixties with the credit “Trad. Baez”. Arguably seeing the Baez credit was why Page took the credit he did for the arrangement on Led Zep 1.

This all brings me to Birthday Morning, the final track on the 1968 album, Birthday. It is truly a lovely track appearing on one of The Association albums that I don’t have – yet.