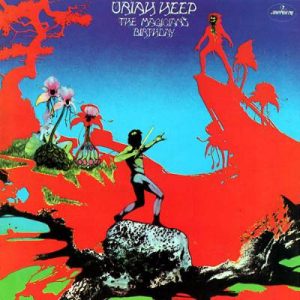 What a wonderful birthday, up late, then Olivia and I took a trip on the bus from Penzance to Mousehole (pronounced mausl like mauser). The sun was shining, the sky was blue, the sea a deep green, the seagulls snow white and pale grey and the tiny Mousehole harbour was the ultimate experience of idyllic Cornish beauty. Dinner with Dare and Martin and back to In Deep for a vinyl loving session.

On January 27th 1973, I went to my first concert, Uriah Heep and Maldoon at The Stadium in Liverpool. The day before, in Birmingham, they had recorded the set for their Live In January 1973 double album. It was the classic line up of Dave Byron, Ken Hensley, Gary Thain, Lee Kerslake and only original member still touring with the band, Mick Box. Although they didn’t record the concert I saw, having a record  of their set from the night before allows me to re-live that very first Rock show that I saw – should I choose to.

The Magicians Birthday was released two months prior to the show with its striking Roger Dean cover art, bright red, blue and green. I can’t remember too much from the night except for a pair of grey jeans and a blue denim jacket (a bit too neat, too dressed up) as I ascended the road to The Stadium with a mix of trepidation and excitement. I remember the album’s title track had keyboard player Ken Hensley playing a whole lot of crazy slide guitar that must have stuck with me as I learned to both play and attack the guitar into the future.

I suppose it was a life changing night and if it had been Marvin Gaye or Bob Marley or T.Rex, it may have introduced me to the world of music in a different order. The reason I say this is because Uriah Heep never had any love outside of their fans and I was unaware at the time of the hierarchy, the critics, the cynics and the idea that people may judge you differently depending on the music that you liked. To this day I have been a fan of both Al Green and Emerson Lake And Palmer – the other most hated group from the seventies by those that insist that their taste is best. I am only grateful to have been exposed to Uriah Heep before Miles Davis, ELP before Funkadelic and The Beatles before Bob Dylan.

Happily, luckily as I sit in the In Deep Music Archive today listening to Porcupine Tree, Uriah Heep and Sam Cooke and after yesterday listening to Temples and Gil Scott-Heron, The Association and Laura Marling, Booker T and Georgie Fame, Peter Gabriel era Genesis and The Idle Race, Terry Callier, Steamhammer, Four King Cousins and Isaac Hayes, Jeff Beck and Concrete Blonde and last but not least Carole King’s Tapestry – I thank the imaginary supernatural being in the sky for making me love all types of music and Charles Dickens for writing David Copperfield (1849) so Uriah Heep could name themselves.

Uriah Heep taught me some lessons and after meeting Mick Box in recent years and discovering him to be one of the most affable and warm people I have ever met, I felt good about not going along with the idea that his band were a load of rubbish. I also learned from the fact that his band mates weren’t so lucky. Gary Thain was dead at 27 from a heroin overdose and Dave Byron dead at 38 from liver failure due to massive alcohol abuse. I also learned that if you like something then that’s good enough and that other people’s opinions can be a mixture of both discernment and insecurity and generally insignificant. There’s nothing like a good debate about why something is worthy but also nothing better than an open minded music lover, a listener, a true fan that loves and lets you love.

A massive thank you to all friends and followers that sent me birthday greetings accompanied by some startlingly humbling comments. I am grateful for your love, your support in regards to my musical pursuits with Noctorum, Anekdoten and solo projects as well as the labour of love that is the Songwriting & Guitar Guidance (by the way an hour isn’t really an hour, it’s as long as it takes on the day). Also the love of collecting records and writing about music and sharing music through the In Deep Music Archive. Olivia and I do hope that one day this will all be available as a library, a resource, a culture centre with live shows, teaching and lovely cake – for everyone.