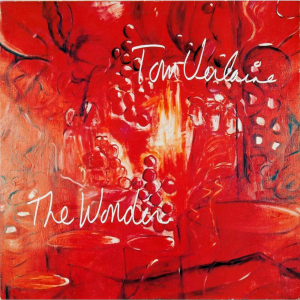 I wasn’t intending to post this today, I just stumbled across it. The reason I posted it was because I play on it (uncredited) – I can hear me. It’s from The Wonder, released in 1990. I recorded it in a studio in New York one afternoon. I’ve always been a fan of anything Television or Tom Verlaine. I have all his albums but I just wish that someone would give him some money so he could do what he did post Television – that is, record those inimitable Verlainesque musings.

Some things you should know: Bowie recorded Kingdom Come from Verlaine’s self-titled debut (1979) on Scary Monsters (1980). Lloyd Cole recorded Glory from Television’s second album Adventure (1978). If you are looking for Cole’s version, it’s on the B-side of the Forest Fire 12 inch from 1984.

Verlaine co wrote Break It Up with Patti Smith and plays on Horses (1975), he also appears on Gone Again (1996) and Gung Ho (2000) as well as Smith’s version of Hey Joe (1974). In 1996 Verlaine was asked to produce Jeff Buckley’s Sketches For My Sweetheart The Drunk. More recently Verlaine played on Till Next Tuesday and Appetite, two tracks from Look To The Sky (2012), the second album from Smashing Pumpkin’s James Iha. You can also hear him as part of The Million Dollar Bashers on the I’m Not There soundtrack (2007) – the band features Nels Kline, Smokey Hormel, Lee Ranaldo, Steve Shelley, Tony Garnier and John Medeski.

Last but not least, I play on another track or two on The Wonder (possibly Shimmer), I didn’t know the titles at the time, I’m not sure he did. Years later I ran into him at a Starbucks in New York (he is New York). These days he tours Television (without Richard Lloyd) but I wish he’d come back as a solo artist, I miss his special songs, his special lyrics and his special voice, the legend is Television but his forgotten solo albums remind me that not all music is made to be successful, sometimes it exists to highlight an individual with something to say that no one else can say in that way – that’s Tom Verlaine.