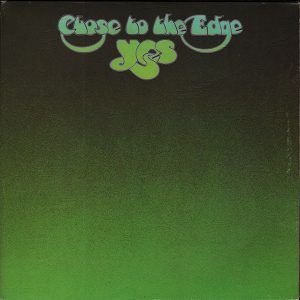 Tomorrow, Olivia and I will head off to the Night Of The Prog festival at Loreley in Germany, a festival that she hosts and will include Prog Rock giants Yes. It took me years to see Yes even though I had their records in the seventies. I eventually saw them at Sydney Entertainment centre sometime in the 21st century. I’m pretty sure it was the classic line up of Anderson, Wakeman, Squire, Howe with Alan White on drums (correct me if I’m wrong). Close To The Edge was drummer Bill Bruford’s last studio album before joining King Crimson and forming UK – White replacing him for Tales From Topographic Oceans released in 1973.

A couple of things I remember from the concert were Jon Anderson looking like he’d just escaped from a health club video and Chris Squire playing a triple neck bass but musically they were very satisfying with Anderson singing like a bird in that unique choirboy falsetto.

One of the most maligned bands by the Punk crowd, they never imagined that instead of wiping them out that their member numbers would swell into double figures and that the band would split into different versions of itself, most key members playing together as one band on the tense Union (1991). The version that will play at Loreley includes Anderson, Wakeman and Rabin with Louis Molino III on drums and Lee Pomeroy on bass. This is not the official Yes band. The official Yes is Steve Howe, Alan White and Geoff Downes with Billy Sherwood on bass and Jon Davison on vocals. The Yes I will be seeing has to be billed as Yes Featuring Jon Anderson, Rick Wakeman and Trevor Rabin. It seems that the Yes with the original singer and founding member, down to earth personality virtuoso Rick Wakeman potentially in a silver cloak and the guitarist from Owner Of A Lonely Heart might be quite good. In the wake of other founding member Chris Squire’s death in 2015 and original keyboardist Tony Kaye involved in his own band Circa, I imagine that this version might be the best option for seeing the band live – we’ll see.

One wonders how this silliness ends up being a reality – there’s two Wishbone Ash line ups, guitarist Andy Powell’s version and singer bassist Martin Turner’s version. There’s been three versions of The Sweet and there’s lots of stories about the bogus Fleetwood Mac and the other Bad Company. It all seems rather more about the money and when you consider Rain Tree Crow and Heaven And Hell you wonder how it feels knowing that everything that was once new is what has made them old. I’m sure there are other examples of this, let me know if you think of any. 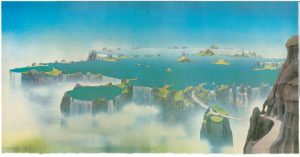 Ultimately, nothing beats the original records and arguably the classic line up, the band that made Close To The Edge (1972) and Fragile (1971) with Roger Dean’s artwork – and ok and The Yes Album (1971). But I always loved the track And You And I on Close To The Edge and Heart Of The Sunrise on Fragile – warm and complex, soft and frantic, beautiful and both albums fascinating musical journeys. I never tire of Heart Of The Sunrise or Roundabout from Fragile, I never tire of Siberian Khatru and the title track from Close To the Edge, Yours Is No Disgrace and Starship Trooper into Würm, I’ve Seen All Good People from The Yes Album. Both the earlier and the later albums have special moments and let’s not forget original guitarist Peter Banks who played on the first two albums, Yes (1969) and Time And A Word (1970) before forming Flash. He died in 2013.

This isn’t really intended to be a review of these classic Yes albums, more a realization that I’ll be seeing one version of them playing in a few days, think of it more as a preparation, in the meantime enjoy some of their greatest work.

And You And I from Close To The Edge

The complete Close To The Edge album