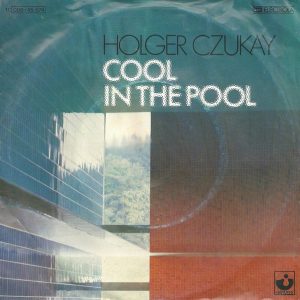 The last post on his website was six years ago, his music reaches from dense complex grooves, raw innovation to eccentricity. I love an intellectual with a self deprecating sense of humour, Czukay’s and his former band CAN’s massive influence on me and the world is hard to gauge.

Here he is in 1979 riding the line between insanity and genius, playing the clown, making me laugh out loud. He began editing tape, finding sounds and generally composing sound pictures before samplers simplified the process to a button instead of a razor blade and a vivid imagination. Eventually changing roles in his band to become the ‘treatments’ guy and leaving the bass playing to latter day CAN member Rosco Gee.

I suppose he must wonder at DJ Shadow’s critical acclaim and Moby’s riches but then again probably not, I met him once in a cafe in Cologne, he was humble, accommodating, patient, a pleasure to engage with for this drooling fan.

He is now 79 years old, born in 1938 in Danzig, now Gdansk and part of Poland. I recently bought reissues of three of his albums, Movies (1979), where Cool In The Pool appears, Der Osten Ist Rot (1984), The East Is Red in English, and Rome Remains Rome (1987), which comes as a double 10 inch. Apparently due to tape deterioration they have had to be ‘reorganized’. This means that what you get with the rereleases are completely different versions of the original albums in songs, sequencing, track listing and also cover art. But due to the nature of Czukay’s avant-garde musical style the results are fascinating.

Having worked with David Sylvian, Eno, Conny Plank, Jah Wobble, The Edge and luminaries from this thoughtful branch of music, Czukay will always be admired as the lovable professor tinkering with a dicataphone or a short wave radio except in his case he didn’t simply inhabit his laboratory for its own sake. He took his work and turned it into music, gave it a groove and then shared it with the world without concern for the consequences, following his own vision in his own inimitable way, without compromise – like we all should.