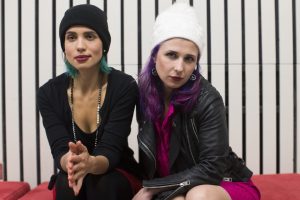 Pussy Riot must be one of the most well-known bands in the world that don’t actually release records or sell tickets for live shows. But then they aren’t exactly a band, more a political collective, still, they do make music and it helps tremendously in pushing their cause.

Of the clips below, the first, Organs, is a visceral modern Russian protest song that makes you wonder how they’re not back in jail. It’s openly provocative to the regime but apparently not breaking the law, whereas “Hooliganism” and “inciting religious hatred” as a charge for their much publicized anti-Putin protest in the Cathedral Of Christ The Saviour in Moscow in 2012, landed two members, Nadezhda Tolokonnikova and Maria Alyokhina, in prison for two years.

Organs is a critical dialogue in Russian over a beat, obviously put together by somebody that knows what they’re doing. It’s not Hip Hop but might appeal rhythmically to that audience. I find it rather beautiful and rather powerful. At 2.20 the monologue has stopped and the song (because that’s what it is) weaves itself into lovely moody strings and atmospheric electronics with an intriguing programmed beat. To me this is quality music, the message in the words, the delivery, the sound of Russian and the clever programming that draws you into another way of doing things, away from guitars and real drums – meaningfulness in the guise of contemporary fabrication.

Then there’s the video, beautifully shot horror, a depiction of the struggle, the reality of modern day Russia in relation to freedom of speech, womanhood and the perpetual throwback to old fashioned patriarchal thinking in a modern world where there should surely be no inequality anymore. The rather beautiful and equally serious Nadezhda Tolokonnikova bathing in a bath of blood, protests in quiet contemplation, symbolized in a brutal raw challenge that however disturbing pales into significance when compared to the rights and treatment of LGBT people, the outspoken and those with a political opposition to Putin and his hold on power – a situation that Pussy Riot consider a dictatorship.

I Can’t Breathe, the first English language release is better explained by wikipedia:

Pussy Riot released their first song and video in English in February 2015. “I Can’t Breathe” is named for the last words that Eric Garner said as New York City Police held him to the ground in a chokehold. In their music video for this song, band members wear Russian riot police uniforms and are slowly buried alive as they sing. They wear these specific uniforms because they are worn by Russian police during clashes between police and protesters for change, and to make the statement that illegal violence not only kills the oppressed, but slowly kills the oppressors. According to Alyokhina and Tolokonnikova, “Policemen, soldiers, agents, they become hostages and are buried with those they kill, both figuratively and literally”. The symbolism behind the “Russian Spring” brand cigarettes in the video is that the brand name is the same phrase used by supporters of Russian invasion of the Ukraine. Pussy Riot was responsible for concept and production of the video, while vocals and lyrics were performed by two other Russian bands, Jack Wood and Scofferlane. With this song, Alyokhina and Tolokonnikova begin to show the parallels between police brutality and state oppression in Russia and the United States.

The voice in the role of Eric Garner is Richard Hell who a certain age group know as a hero of New York Punk, an early member of Television, evolved from the previous group The Neon Boys but perhaps best known for his song Blank Generation by his band Richard Hell And The Voidoids.

Note Nick Zinner from Yeah,Yeah,Yeahs plays piano and bass and the two most prominent members of Pussy Riot, now it seems a splinter group from the rest of the collective, don’t perform the song, although they are credited as producers, most importantly, they are the idea.

Credits for the video and an overview of its meaning:

Pussy Riot’s first song in English is dedicated to Eric Garner and the words he repeated eleven times before his death. This song is for Eric and for all those from Russia to America and around the globe who suffer from state terror – killed, choked, perished because of war and state sponsored violence of all kinds – for political prisoners and those on the streets fighting for change. We stand in solidarity.

Pussy Riot’s Masha and Nadya are being buried alive in the Russian riot police uniforms that are worn during the violent clashes of police and the protesters fighting for change in Russia. A pack of “Russian Spring” brand cigarettes is on the ground at the beginning. “Russian Spring” is a term used by those who are in love with Russia’s aggressive militant actions in Ukraine, and the cigarettes are a real thing.

“I Can’t Breathe” was recorded in New York in December 2014 during the protests against police brutality together with Pussy Riot, Richard Hell, Nick Zinner, Andrew Wyatt, Shahzad Ismaily (The Ceramic Dog) and Russian bands Jack Wood and Scofferlane.

Pussy Riot have named English Punk bands Angelic Upstarts, Cockney Rejects, Sham 69 and Oi! band The 4-Skins as well as American Riot Grrrl band Bikini Kill and performance artist Karen Finley as influences. So what’s the difference between them, except they’re Russian and censorship in regards to attacking the government might be less acceptable in Russia than in the Western world? They are Feminists, campaigners for gay rights, fighters for freedom of speech but as a band they differ from their influences in that they don’t actually release records, they don’t need to, they have Facebook and YouTube, plus they consider selling products a capitalist principal so don’t expect to pay for a ticket at one of their gigs. It’s all impromptu and seemingly only illegal acts gain the attention they need to spread their message.

From the point of view of the In Deep Music Archive, I can’t collect their records because they have none to collect, whether that in itself is a frivolous pursuit or a worthy one I can only defend from the point of view that as a document of one of the world’s greatest and most influential of freedoms, the initial perception of Pussy Riot as a Punk band rather than activists per se gave them more attention than any other medium possibly could. They might have disappeared between stories in the press, slipped off the news as all stories do however tragic (Syria anyone?) – it’s the perennial voice of music that is forever heard so loudly and keeps their message alive in our minds.