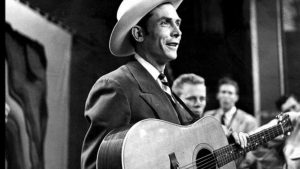 With Halloween and The Day Of The Dead festival approaching, the ‘Death’ theme continues.

Having left behind a timeless legacy of countless Country classics and influencing Johnny Cash and Bob Dylan, Hank Williams may not have been quite ready for The Angel Of Death, dying in the back of his cadillac on the 1st January 1953, aged just 29 years old.

It was the era of 78’s and singles and at the time of his death, Williams had only made two albums, the debut Hank Williams Sings was mostly b-sides but the second Moanin’ The Blues included 3 No.1 hits, Lovesick Blues, Long Gone Lonesome Blues and Honky Tonk Blues, as the long player started it’s ascent.

The Angel Of Death seems to be one of the posthumous Williams single releases and there’s little information about it. It looks like it was released in November 1954 (MGM 11861) and was backed with (I’m Gonna) Sing, Sing, Sing. There’s two versions, one with the Drifting Cowboys and one with just voice and guitar. I’m sure there’s some Williams experts out there that could tell me more about this song.

Country music features little here, more because of time than desire and tonight’s playlist in the archive consisted of Hank, Waylon Jennings, Wanda Jackson, Bobbie Gentry and Jeannie C. Riley. It’s an acquired taste and whether you can get into this style from the fifties and the sixties or whether the more contemporary Alt Country is your thing, don’t let the word ‘Country’ put you off – quality lurks everywhere.