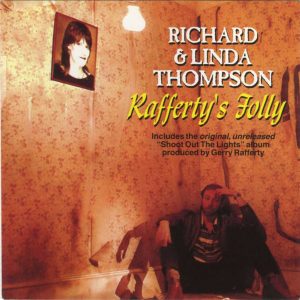 After leaving Fairport Convention in 1971, Richard Thompson released his first solo album Henry The Human Fly to negative reviews. The next five albums saw Thompson perform as a duo with singer and wife to be Linda Peters credited as Richard And Linda Thompson. Their last album together, Shoot Out The Lights, preceded a break up and was arguably their best, it included one of Richard Thompson’s classic and most enduring songs, the world-weary Wall Of Death.

This was to be the couple’s last hurrah but consequent to the trauma of their break up and perhaps slightly surprisingly despite Thompson’s quintessential Englishness (or perhaps because of it) a renewed interest in his Folk Rock in America established him as an in demand live performer, session guitarist and songwriter across the Atlantic. The album, originally financed by Gerry Rafferty, was recorded in 1980 and remained unreleased as Rafferty and Thompson fell out. Later the album was rerecorded in 1981 with Joe Boyd producing, finally seeing the light of day on Boyd’s Hannibal label in 1982.

The picture above shows the album cover doctored and retitled for the bootleg version of the album Rafferty’s Folly that includes the Rafferty sessions from Chipping Norton Studios recorded in 1981 plus other songs – it’s a bootleg! I’m listening to it right now.

If you haven’t discovered Richard Thompson, you may want to listen to a collection first to hear his unique voice, the best of his sometimes dark and or poignant songwriting, his mind-bending acoustic guitar playing and dazzling string-bending approach to the electric guitar.

I had the pleasure of opening for him at Slim’s in San Francisco many years ago in front of an intimidating sold out crowd that had me announced after all tickets were gone – no pressure then. Richard was absolutely charming and nerves were settled and ice broken when he asked me for my autograph – for his daughter Muna. I have a great picture of Richard and I, buried in a box somewhere. I’m a fan and continue to investigate any record he releases with great interest – budding guitarists and songwriters should pay him some special attention.

Well you’re going nowhere when you ride on the carousel
And maybe you’re strong, but what’s the use of ringing a bell
The switchback will make you crazy
Beware of the bearded lady
Oh let me take my chances on the Wall of Death