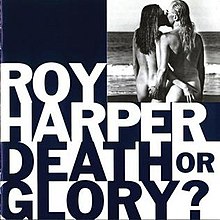 Halloween…and as October comes to an end, this will be my last post on the theme of death. There are few smarter talents out there, few more perceptive narrators that can articulate the human condition, the absurdity of life, the rules we pander to and our legacy in death, than the inimitable Roy Harper. On Death Or Glory?, his seventeenth album, we are faced with a man exposed to the raw pain inflicted by a world lacking in empathy. Each day’s destruction observed in war and the environment and throughout this album, the pain of a relationship break up that shocked and devastated him. In true Harper spirit the album takes it all on with a poetic bent and a straightforwardness that has you simultaneously disarmed and taken aback. Later reissues of this painfully honest confession omit the spoken word poems that truly show his despair. My copy of the record came with a personal ad asking for potential new partners to get in touch.

His beliefs, his philosophy have never changed because he was always right in his criticisms of the universe whether it was within the music business or in the lamentable world where we live. On 1988’s Loony On The Bus, the title inspired by a review from a women’s magazine, he wrote on the back cover: “Message to toilet music comics – if there was any way that I could make you dorks pay the same as everyone else for this I’d be pleased”. Society itself also always gets a rather hefty dose of his venom as he pleads for common sense, clearly the only sensible man in the room found himself painted as a madman.

Through it all and like all Roy Harper albums, there’s beautiful singing and dreamy sensitive songs to balance out the rancour. It’s as if Roger Waters and Dave Gilmour, a mixture of these singers and lyricist, exist in one man (most people reading this will be aware of Harper’s lead vocal on Have A Cigar, a stinging attack on record companies from Pink Floyd’s Wish You Were Here).

I met him once when he came to see All About Eve. He was with his ex-partner, Jacqui Harper, the one that all these heart wrenching poems and songs are about on Death And Glory, the girl on the cover. I never tire of his records and just today I opened a package that contained three lovely sparkling reissues of three of his albums, Stormcock, Flat Baroque And Berserk and Lifemask, I have them already of course but these limited fresh pressings need to be in the archive next to the original releases. The post declaration was signed by Tracy Harper, Roy now happily married, it begs the question do we really have to suffer such pain before we are allowed to find ‘the one’, confident and sure till our last breath and just how much does the sorry state of our realtionship with the universe contribute to our ability to cope with our personal relationships and ourselves before our defining experience – that tearful farewell to the she or he that we truly and deeply love, the final one with whom we stayed forever.