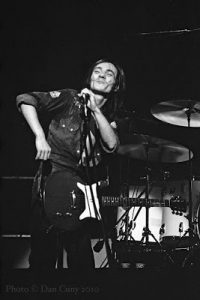 As we leave for LA tomorrow I thought I would cast my ears back to the glorious Californian Rock Star infested seventies and see who might have been lurking there. Look who I found! Humble Pie at The Forum in LA in 1973 with Stevie Marriott on vocals and guitar, Clem Clempson on guitar and vocals, Greg Ridley on bass and vocals and Jerry Shirley on drums. Sadly Marriott and Ridley are no longer with us but as you can hear from this clip, in losing Marriott we lost one of the greatest Rock & Roll singers the world has ever known.

After leaving Small Faces on New Year’s Eve 1968, Marriott formed Humble Pie with Peter Frampton and headed for America where they toured constantly. After four studio albums and one live album, Frampton was gone (you know what happened next). His replacement was Clem Clempson (ex Colosseum). They carried on and made four more albums before breaking up in 1975.

From there on the Steve Marriott story is a tragic tale of drug addiction and untimely death in a fire at his home. But when he was at his best, belting out with that unbelievable powerful voice, defying nature as it exploded out of his tiny frame or when he was part of one of the giants of the English sixties scene, creating Mod Psychedelia with Small Faces, Marriott was a force, a whirlwind, a volcano spewing out sparks and lava, rocks and debris, destroying all the other vocalists in his path. Apparently he was Keith Richards’ first choice after Mick Taylor left The Stones but he effortlessly upstaged Mick Jagger at the audition and Mick wouldn’t have it. Hear him sing Honky Tonk Women and you know that story is true.