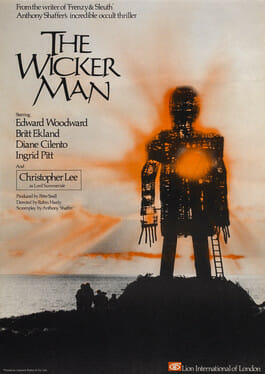 It seems appropriate to post this rather odd collaboration on Walpurgis night – (in German folklore) the night of April 30 (May Day’s eve) and into Mayday, “when witches meet on the Brocken mountain and hold revels with the Devil”.
Saint Walpurga was an English missionary from Devon cannonized by Pope Adrian II in 870. This aristocratic and saintly lass was the daughter of Saint Richard The Pilgrim (saintlihood ran in the family). She became an abbess and healer in the Frankish empire that occupied a large part of Europe including what would become France, Germany and the smaller lands post the decline of the Roman Empire. Saint Walpurga shares her name with the coming out of the witches and commemorating the moving of her relics to the German town of Eichstätt in Bavaria. Apparently German christians believed her saintliness fought against plague, rabies and whooping cough and in case you were wondering the relevance – against witchcraft. Oddly the witches chose this night to come out, perhaps a show of strength, perhaps to protect each other from the christians that believed any witch was an evil witch and never imagined their God might be whimsically ignoring their prayers as crops failed, wars ensued and children and the weak died of disease – it must be the witches. Although she died in 777 her tomb allegedly still produces Holy Oil which heals sickness.
The Fair Isles was a project that involved my band mate from angular Swedish Progressives Anekdoten, Nicklas Barker, playing guitar and mellotron, my eldest daughter Signe Carlberger on vocals and myself on 12 string guitar and percussion with engineer and studio owner Daniel Bengtsson playing bass. The video and the song were commissioned for a boutique Swedish beer company with a vision for the macabre – go figure. The song (Willow’s Song) was originally on the soundtrack to the classic British pagan thriller The Wicker Man (1973) starring Edward Woodward as the hapless christian Sergeant, Christopher Lee as the cult leader and Britt Ekland’s breasts. If you haven’t seen the film you are not ready to die.
https://en.wikipedia.org/wiki/The_Wicker_Man
https://en.wikipedia.org/wiki/Saint_Walpurga