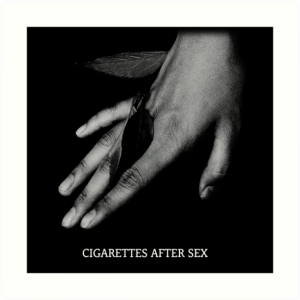 Greg Gonzalez, leader, guitarist, singer, has been called the man with the androgynous voice and on this lovely song K. from the debut album by his band Cigarettes After Sex you would be hard-pressed to confidently call the singer’s gender.

A tangent: In this time of gender identity and awareness, the so-called ancient term ‘the battle of the sexes’ has taken on a whole new meaning and the stereotypes of the past have become meaningless. Still, ignorance and prejudices against the LGBTQ community for example continue. We would hope in our evolution that we can move on from the oppression of those that stand outside society’s accepted norms – as if anyone can claim right or wrong morally or otherwise in a world of different cultures, biology and personal preferences.

I remember my father being specifically offended by the voice of The Stylistic’s singer Russell Allen Thompkins Junior after an appearance on Top Of The Pops – that pure high and beautiful voice somehow angered him. He was also offended by a comment I made about the glory of Thin Lizzy guitarist Scott Gorham’s hair – “NOT IN MY HOUSE” he bellowed. But somehow he tolerated the show every week despite those scary effeminate men wearing their Mum’s blouses back to front and sprinkling glitter in their hair.

Sting, Christopher Cross, Curtis Mayfield, Jon Anderson – all had voices in a higher register but their gender was never in doubt.  With Greg Gonzalez it’s not just register – uncertainty somehow elevates the music to an even higher level of beauty by adding mystery to the equation. One wishes that one could be kept in the dark in regard to the voice’s source, something quite impossible in a world of no secrets. Intriguing as it is, it’s not just this vagueness that seduces the listener, it’s the nonspecific naked beauty of the song in its delivery and execution. The restraint, the sensitivity, the soft demand in the lyric for the lover to return after a casual encounter turns into something more. It’s quietly sensational, as attractive as the two lovers are to each other and as comforting as a day under the blanket on the couch together with the cat and your favourite romantic film could ever be – snug.

Having found this enticing song a contemporary treasure, one wonders – can the debut album sustain such effortless intensity and grace? I’ve only heard the album once and it washed over me. I was somehow disappointed with the artwork, the lack of an evocative title and the rather disparate and cliched post-coital conclusions in the band name, I fear the monotony of the mood might become tedious rather than enveloping. Development in the songwriting and finding that magic door that opened on this wonderful track is always elusive, especially maintaining that magic for a whole album. Unlocking the invisible latch can be impalpable – I hope to find that indefinable thread throughout the album on repeated listens, I encourage you to do the same.