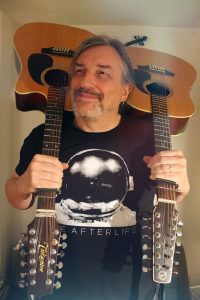 One of my most impossible tasks is listing my favourite albums. As soon as I commit, I remember that I forgot something. So when I was asked to do this list for [Sic] Magazine, I was hesitant to get involved. But then I heard the Exit North album and I thought this really is without any doubt one of my favourite albums of 2018.

But it’s still tough because I tend to have vinyl versions of albums that I buy sent to the archive and I don’t really want to stream them for the first experience – but then I can’t really wait. What a dilemma. So, in the end, that week we spent in Penzance at the archive in January did allow me to catch up with the vinyl I had bought so between Spotify and In Deep, this is what I came up with.

Still, I couldn’t just list 10 albums, there were the other 10 albums that I also liked a lot, then there’s the EPs and the Box Sets and what about the albums I’ve never heard of that I know I’m going to like (that’s the odd list of bands you’ll see that don’t exist!)?

Then I thought, oh no it’s already 2019 and what about the albums that have already revealed themselves? Hence the beginning of a list for 2019.
And then there’s the fact that I need to listen to all these albums multiple times and first impressions may be overtaken by a deeper experience. Like for example, Neil Finn’s Out Of Silence.

As usual it’s a pretty eclectic list and as usual, I’ve failed to find any Hip Hop that I really liked although I did discover Dreezy last year. I guess it’s not that big on Electronic Music either although I am a fan. So, what did I miss? Let me know and feel free to post your own favourites on the In Deep website as well as Facebook.

Ultimately it’s all subjective and the list will never cover everything new that has inspired you in a year unless you start keeping your list from January – so this year I’m going to try that even if it’s just to see if my Top Ten turns in to 34 albums.