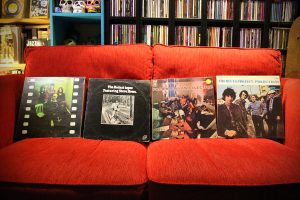 Music today has been a band you might not know, Bodast. It featured Steve Howe who later joined Yes and as of today has his own version of Yes with Alan White, Geoff Downes and Billy Sherwood who have all been in different incarnations of the band and with Jon Davison on vocals. They had to find a vocalist whose voice was similar to the distinctive voice of Jon Anderson. Journey did the same thing, substituting Steve Perry with a sound-alike, Arnel Pineda from the Philippines. The other version has Jon Anderson, Rick Wakeman and Trevor Rabin with a new bass player and drummer. What a strange situation it is. I saw Yes with Jon Anderson at Night Of The Prog a couple of years ago, Jon Anderson’s voice was beautiful and pure, he really sounded so good. Rick Wakeman’s cape was a little over the top and unnecessary, obvious. But is this how it is? They have to be like what people expect them to be, including the cape? When Steve Howe recruited Jon Davison he couldn’t get any singer, he had to get a singer like Jon Anderson. It didn’t use to be that way. When David Coverdale and Glenn Hughes replaced Ian Gillan in Deep Purple they were hired for their own voices, not his. Even Black Sabbath hired Ronnie James Dio because he was a great singer, not because he sounded like Ozzie. It’s the old problem of the nostalgia act again, the future just isn’t as interesting as the past…Having said all this looking at Nick Mason’s Saucerful Of Secrets’ band with Hawaiian-shirted bass player Guy Pratt doing the duckwalk along to One Of These Days and wearing those whiter than white trainers was all wrong. (Spandau Ballet’s Gary Kemp, guilty.) It looked like an outing for the Ferrari owners club, I guess it was. Close you eyes and musically it was really good, open them and die.

After Bodast I played The Yes Album released on Atlantic records in 1971 and featuring Steve Howe as a new member replacing Peter Banks who would form Flash but still with Tony Kaye on keyboards who would shortly form Badger, his place taken by the inimitable and the flamboyantly dressed Rick Wakeman. It seems that Steve Howe was instrumental in replacing Kaye and talking of instrumentals, I learned tonight that the chord sequence from Würm (the last section of Starship Trooper) originally came from a Bodast song, Nether Street. You can hear it on the Bodast album that was finally released in 1981. To think the band was formed in 1968 and it took this long to release their record. The singer was Clive Skinner, aka Clive Maldoon, he sadly died in 1978 and never knew it finally came out. The first major band I saw was Uriah Heep and Clive Maldoon was the support. I saw Yes once in Sydney with Anderson, Wakeman, Howe, Squire and White at the entertainment centre (now gone apparently). That same week Roger Dean had a gallery exhibition that I went to. It was in the same street as the studio we were recording in. There I met Dean himself and Chris Squire for one of three times, but that’s another story.

I started and finished the night with some American Bluesy influenced albums, the first Pacific Gas And Electric (1969) from LA with Charlie Allen on vocals. He was the drummer, but when they realized he was the band’s best singer they got another drummer and he became the front man.

Last was The Blues Project’s second album Projections (1966) featuring Al Kooper who would leave after the album’s release to form Blood, Sweat & Tears. Either side of Projections the band released a live album. It seems unusual for a band to have two live and one studio album in their first three releases (including the debut), but then this was the sixties, anything was possible. Apparently the band never saw the album cover or heard the mix before it was released. That was the power of the labels in those days.