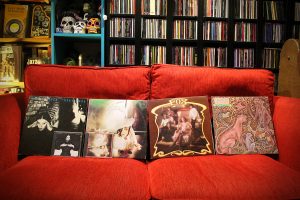 Music today has been interesting voices day. Starting with Lene Lovich who had hits in the New Wave seventies with more than one song, but mostly she is remembered for Lucky Number. She actually grew up in Detroit, but moved to England when she was 13 where she met her partner and co-writer Les Chappell. She was signed to Stiff Records and made Stateless in 1978 and then Flex in 1979 (CDs have extra tracks). No Man’s Land appeared in 1982 as she ended her relationship with Stiff. It was seven years until the independently released March (1989) on Pathfinder Records. It seems quite hard to find (I have it). But it was another 16 years till Shadows And Dust came out in 2005 and it’s now another 15 years since. Dear Lene, please make another record.

In honour of DAF, I quickly went backwards to Fox, the brainchild of Brill Building songwriter Kenny Young. He most famously co-wrote Under The Boardwalk as well as songs for Herman’s Hermits, The Searchers and more. He also discovered and wrote Come Back And Shake Me for Clodagh Rogers. His secret weapon in the seventies was Noosha Fox, real name, Susan Traynor, an Australian with an unusual voice allegedly an inspiration for Kate Bush. Only You Can and Imagine Me Imagine You were both hits from the debut album, but success eluded them completely on the second album as Kenny Young decided he wanted to sing some of his own songs, plus drummer Jim Frank sang two songs, why? It was like a Kate Bush album where five of the songs are sung by someone else. But they came storming back with their third album Blue Hotel where Noosha sang all the songs (they learned) including their most famous song, S-S-S-Single Bed in 1976, the album coming out in 1977. Then what the hell happened? Noosha had a brief low key solo career and then disappeared. Kenny Young went on to form Yellow Dog and had a hit with Just One More Night. Guitarist Herbie Armstrong went on to work with Van Morrison, keyboard player Pete Solley joined Procol Harum. But Noosha, where are you?