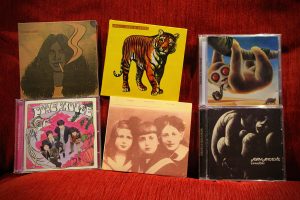 Music today has been all about Japanese late sixties and early seventies CDs that live in the archive. In the sixties and seventies the Japanese were seriously influenced by Western sixties Pop and seventies Rock and out of that came some fascinating albums. (They often covered songs by their influences.) One of the better known legends is guitarist Shinki Chen who recorded with Powerhouse, Food Brain and Speed, Glue & Shinki. There are two albums by the latter, but Eve (1971) is the only one made when they were still together as a band. The second is mainly an album by Joey Smith, their crazy Filipino drummer and singer that he put together using Shinki’s guitar bits long after he left the band. Shinki left due to Smith’s antics – drug related of course. Their name comes from Smith’s love of speed, bass player Masayoshi Kabe’s penchant for sniffing glue and simply Shinki’s name – was it ever going to last? Smith went on to be a legend in his own right in the Philippines with the Juan de la Cruz band. Before all this Shinki was in lots of bands (Powerhouse and Food Brain also included Kabe) and also made a self-titled solo album (1971). He (like everybody) was influenced by Jimi Hendrix and the sound coming out of Western amps and guitars, his playing reminds me of the first Blue Cheer guitarist Leigh Stephens. If you would like to read all about it you could buy Julian Cope’s book Japrocksampler where you’ll find all the important details.

There was Yuya Uchida And The Flowers’ Challenge (1969) and Carmen Maki, whose second album Adam And Eve released as the sixties became the seventies has influences of both eras. Born to a Japanese mother and an American father she is some kind of Japanese sixties Psyche chanteuse. She went on to make the influential album Carmen Maki & Blues Creation (1971) with important Japanese guitar player Kazuo Takeda. There is so much to discover about Japanese guitar music, but I’ll have to leave it for now with an introduction to Flower Travellin’ Band, Far Out, and the Far East Family Band for a Japanese vinyl sesh sometime in the future via Yonin Bayashi, whose album Ishoku-Sokuhatsu signals an era of more restraint. Final mention for Yuya Uchida and Joey Smith, who both died in 2019. I can’t find anything out about Shinki Chen except that he tired of making records and just became a live player. Arigatou.