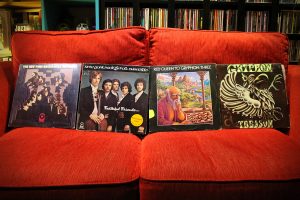 The great thing about a daily blog is that one day it’s this kind of thing and another day it’s about the stripy fish that swim in shoals in the pacific ocean or Japanese Psychedelic Rock. Or possibly even this next tangent. Classical music, who buys it? I remember going into HMV or was it the ex Virgin Megastore in Oxford Street in London and there was a whole massive department dedicated to just classical music. It was always empty when I was in there, a nod to its relevance but impractical in terms of sales. The internet must have destroyed the income for classical music almost completely. I could always find second hand copies of beautifully recorded and mastered Deutsche Grammophon records with amazing orchestras conducted by Leonard Bernstein or Herbert von Karajan. There would be Mozart, Beethoven, all the famous composers of history and mostly in perfect condition and often for just 50p each. So how could shops afford to have a stock of new Classical records? Perhaps there was once a market for them between the sixties and the early eighties, but surely not anymore. And by the way, you might need a real studio to record a classical orchestra, it’s a little cramped in the bedroom and quite dangerous with all those stray bow thrusts.

Which takes me to today’s music. New York Rock And Roll ensemble are surely forgotten, even though you know at least two members of the band. Michael Kamen worked with everyone from Guns N’ Roses to Kate Bush as an arranger. He sadly died in 1993 at the age of 55 from a heart attack after being diagnosed 6 years earlier with Multiple Sclerosis.

Martin Fulterman you also know but as Mark Snow. You’ve seen him on many TV theme credits including The X-Files. The band were all attendees at New York’s famous Juilliard Music School and had the idea to combine their Classical skills with an interest in Rock music. They released their first self-titled album in 1968, their second, Faithful Friends, in 1969 and more records into the seventies. The first was produced by John Linde and the legendary Shadow Morton. (The Shangri-Las, Vanilla Fudge, Janis Ian, New York Dolls producer.) Is it your thing? Who knows, it’s of its time and I find throughout albums like these that there’s oddly insignificant and equally great stand out tracks.

On the subject of the influence of ‘serious music’ in the Rock world, Gryphon were certainly made up of talented thinking musicians exploring new realms. Progressive, Classical, Rock, Folk, Contemporary, they are famous for being played on all four BBC radio stations in the same week despite them all catering to different audiences. Today Olivia picked a couple of records randomly from the selection. Their last album Treason (1977) and their 1974 album Red Queen To Gryphon Three.