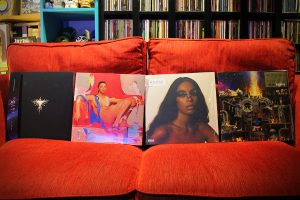 The music today has been soooo now! I started with Lux Prima which is last year’s collaboration between Karen O from Yeah Yeah Yeah’s and producer Danger Mouse. It was way less angular than I expected it. Karen O wasn’t scary at all and Danger Mouse wasn’t sonically dangerous. It was actually pretty mellow, like a less retro Air album with a French girl singer except she wasn’t French.

Next was my favourite, FKA Twigs and her unique vision. It’s like Judas Priest, you’re either there or you’re not. I love the idea of placing Judas Priest in the same paragraph as FKA Twigs simply because liking one, or should I say liking one passionately doesn’t mean that you have to actively despise the other, you don’t even need to despise it quietly. If it’s off your radar that’s enough. You can’t possibly understand everyone in the world’s reasons for their tastes so live and let live. If it’s ‘the dumbness’ that you don’t like, feel sorry for them, if it’s shallow don’t take it seriously and if it stimulates you love it to death. Twigs is stimulating, Cellophane is one of her many cool videos, the song closes her latest album, Magdalene (2019). Judas Priest ROCKKKKK!!! Ha ha.

Which brings me to another great album in a style that won’t have the Syd Barrett fans queuing up at the record store. Solange is Beyonce’s sister and to me her albums are masterpieces of challenging and contemporary R&B. I wish I knew how they did it. Her latest album, When I Get Home, was released in 2019. It’s inscrutable, the strange chords, odd timing, peculiar rhythms, weird arrangements, amazing production, often thoughtful lyrical ideas based on real life and real life issues. I can listen to this stuff all day, because I can never quite understand it.

Then there’s Flying Lotus. He pieces together sounds and makes songs, sometimes it’s weird and experimental, other times it’s Hip Hop, but what it always is, is complex. He’s like Zappa meets Prince in the modern world. It’s interesting how contemporary black music has become so mainstream, because it isn’t easy music. It gives the Progressive bands a run for the money. Its appeal though is always in the groove. The Flying Lotus albums are dense, there’s a lot to explore, I have the latest one, Flamagra (2019), on the turntable tonight. Take note David Lynch fans.