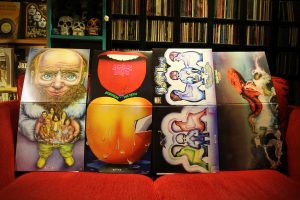 One of the best things that ever happened to me was discovering Gentle Giant all these years ago. I’ve had all their albums since the seventies, I have the DVDs too, but sadly I never got to see them play live. I can’t quite figure out how I missed them. I guess I was younger and poorer and not paying attention. They came through Liverpool at a time when I was going to see lots of bands, but somehow I missed them. They were formed out of Simon Dupree And The Big Sound and had a hit in 1967 with the song Kites reaching No.9 in the British charts. They’d always seen themselves as a Soul band and saw this track as really quite unrepresentative of who they were (rather like Traffic with Hole In My Shoe). Psychedelia was all the craze and if you didn’t join in, well you know what happens. I remember Grunge.

They broke up in 1969 as the label wanted no Soul, more Pop and they somehow metamorphosized into Gentle Giant as the times and fashion changed again. It was an unlikely transition considering their early love for Otis Redding and Wilson Pickett. Shulman Brothers, Derek, Ray and Phil teamed up with Kerry Minnear on keys, Gary Green on guitars and Martin Smith on drums. They were all extremely talented musicians, between them playing guitars, bass, drums, keys, trumpet, violin, cello, flutes and whatever else was there to be blown, plucked or hit – they could also all sing. Consequently they left their Soul dreams behind and concentrated on something far more adventurous.

They have just released remastered vinyl of their first four albums and that is tonight’s musical feast. Their first self-titled album produced by Tony Visconti was released in 1970 and is a taste of what they were to become, a fascinating melodic complexity. Ingenious creations by a band that included multi-instrumentalists exploring, inspired, talented in the execution of music that straddled genres. Their second album Acquiring The Taste also produced by Visconti was released in 1971 and set them on their way to exquisitely executed adventures in harmony, sound and structure, almost modern fairy tales. By the release of Three Friends in 1972 they had replaced original drummer Martin Smith with Malcolm Mortimore. It was a concept album in the time when concept albums ruled the world, the album found its way to the bottom of the US charts. It was to be the only album with Malcolm Mortimore, replaced by John Weathers for the first album I loved by them, Octopus, released in 1973. I played this album to death. They were making a harder sound with their new drummer only hinted at on Three Friends. It was to be the last album for brother Phil who left to spend more time with family. These remasters sound absolutely fantastic and if you want to get into this amazing band then I suggest you get the albums while you can, I’m sure they’ll be limited.