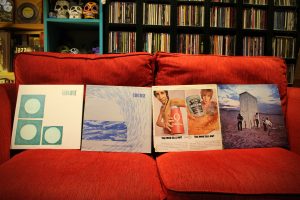 Today’s music began with me breaking my own archive rule, that is: You must listen to something whilst you are looking for something to listen to! Otherwise with such a large collection you could be overwhelmed and find an hour has gone by before you decide. So today I thought what do I want to hear? Nothing came to mind. I’d been watching the engaging drama series ‘Fauda’ that deals with the Palestine/Israel conflict and consequently I was gravitating towards something with Arabic tones. In that section in the archive I found an African album that I’d inherited when I bought my mate Paul Thomas’ record collection and so I ended up playing Side 1 of an album of Modern Moroccan music (seventies), but I just wasn’t feeling it so I went for a silent wander in the aisles. I stumbled across Tortoise, the Thrill Jockey label’s Post Rock instrumentalists. I’d bought the first two albums from Music Nostalgia in Truro a while back. These original albums are quite hard to find at a reasonable price and I hadn’t played them for ages. Good choice, inventive, challenging, explorative, definitely Krautrock influenced and with an experimental side that keeps you guessing. I played the second album first, Millions Now Living Will Never Die (1996), and then the first self-titled album released in 1994 – which led me to my next choice, those of you who know this album and the next one that I played tonight will know why.

I hadn’t played The Who’s Sell Out for ages either. A classic sixties masterpiece released in 1967 and the first of Townshend’s concept albums. The first track, Armenia City In The Sky, was written by Speedy Keen who Pete Townshend produced as a member of Thunderclap Newman. I’m sure you will know the song Something In The Air which Speedy wrote, sang and played drums on. The song was Nr.1 for three weeks in 1969 despite being banned by the BBC as the IRA allegedly took it up as their song of revolution. The album also included the single I Can See For Miles with Keith Moon’s unbelievable drumming. The excellent B-side, Mary Anne With The Shaky Hand was one of four different versions of the song. The Who were amazing in their day, unique musicians, breaking out, not following the rules mixed with talent, ideas and a rebellious attitude. I remember seeing Tommy at the cinema when I still lived near Liverpool. (I think it was with my mate Spanter who I’m still in touch with.) I saw it again in recent years, it was riotous to say the least, Ann Margaret and the baked beans, oh my!

Next, what could be next except Who’s Next? The album cover was a piss take of 2001 – A Space Odyssey (geddit?). Although it was only Townshend that did the deed and the sky is photoshopped in (or whatever they did in those days). Classic tracks, Baba O’Riley, Behind Blue Eyes, I Won’t Get Fooled Again and those are just songs I picked out to remind people of songs they might know. It’s a great album and apart from the songwriting, just listening to Entwistle play bass is a thrill in itself. I don’t really need to mention Moony but you might not realize how much Townshend actually sings on this album, sharing lead vocals on three songs with Daltrey and keeping one to himself. Classic, go buy it NOW!