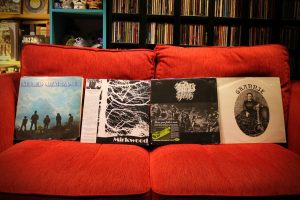 Music on the stereo today has been a trip into the obscure, starting with 1969 and Mind Garage. The net tells me that is the first Christian Rock record although you’d never know it. It sounds like records did in 1969, musically and lyrically. It’s not blatant worship like those American eighties metal bands like Stryper, Soldiers Under Command (1985) was a little, let’s say routine. Apparently Mind Garage made the ground-breaking move of playing Rock music live in church with their Electric Liturgy. Nobody had done that before. Without explanation the band disappeared after one album. The Fleshtones cite them as an influence. Another fascinating fact is that Fleshtones guitarist Keith Streng’s partner Katarina had me babysit her cat, Gorm, when I lived in Stockholm.

I followed Mind Garage with an even bigger obscurity. Mirkwood formed in Dover in 1971 and only made this one album released in a limited edition of 99 copies.This reissue is even hard to find. I bought it at a market stall in New Jersey one sunny afternoon. It’s a Rock album from 1973 that needed recording with a better engineer, but has some neat fuzzy guitars. The second track on side one, Love’s Glass Of Sunshine, steals directly from Deep Purple’s Child In Time, including the crescendo for the lead solo. Presuming Child In Time (1970) came first, which the chronology shows. The fascinating fact for this album is that after the original drummer left he was replaced by Topper Headon who joined, wait for it – The Clash.

Not too difficult to follow this obscurity, because I have the Grannie album! They were formed in the late sixties and made this one album in 1971, again only 100 were made. I found this reissue (probably a bootleg) in Italy, when I was there playing at a festival close to Milan with Anekdoten. It’s a great Prog Rock album. Highly recommended, but hard to find and pricey even as a reissue.

Mad River were from Ohio, formed in 1966. They moved to San Francisco and released their debut album in 1968. You have to get used to Lawrence Hammond’s vocals on this one, rather like you do with Pavlov’s Dog, but once you do, then it’s another forgotten classic from the era.