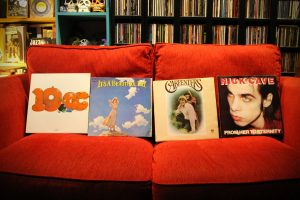 Music today has reflected the idea that there’s different visions. I started off with the first 10cc album from 1973. I was thinking I’d listen to their first four albums, but then didn’t feel like it. These talented individuals pushing and pulling against each other’s ideas, two traditionalist in Stewart and Gouldman, Groovy Kind Of Love to No Milk Today, playing guitar and bass and Godley and Creme, more experimental, playing drums and guitar. What a mixture, making albums both complicated and melodic, pastiche and irony, straightforward, Pop or complex. Four strong voices in their own studio (in Stockport, where I was born).

Following up on Peter from Stockholm’s reminder that Mirkwood’s theft of Child In Time went back beyond Deep Purple In Rock and 1970. If you listen to San Francisco’s It’s A Beautiful Day’s debut from 1969, Bombay Calling is credited to band leader David LaFlamme and the mysterious Vince Wallace. Ian Gillan tells that they rewrote it after the It’s A Beautiful Day version, but they didn’t give credit for the original and key riff. But then they say It’s A Beautiful Day borrowed their Wring That Neck on their second album Marrying Maiden (1970), calling the song Don And Dewey. Check it out.

Then there’s The Carpenters’ third self-titled album from 1971. I always love hearing Superstar (written by Bonnie Bramlett and Leon Russell). I see the twee songs on the album akin to listening to a musical. Perhaps Julie Andrews could have been in The Carpenters and Karen Carpenter in The Sound Of Music?

The Carpenters clearly took me to Nick Cave and his first solo album From Her To Eternity, released in 1984. I bought this album when it came out. It starred Mick Harvey, Blixa Bargeld, Anita Lane, Barry Adamson and Hugo Race (who I met years ago). He had a band called The Wreckery in the eighties and if you like Nick Cave you would like The Wreckery so check them out, too.