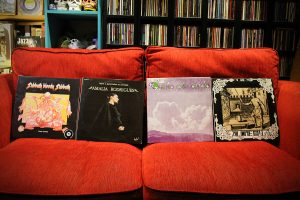 Music tonight took some turns. I was looking at some new releases on Spotify and listened to some of Ozzie’s new record whilst pottering and thought it’d be nice to hear Black Sabbath. ‘Nice’ is not the usual word that people associate with Black Sabbath, but I realized some time ago that Sabbath Bloody Sabbath (1973) is a really melodic and catchy album. (Rick Wakeman plays on it.) Amazingly it was recorded in September and released in December of that year. Those were the days. What a terrible pressing it is though. I need to play my original copy over this reissue, it has to be better sounding. What a stoopid thing when an album is re-released, repressed, remastered and they do a terrible job. Or like my Kinks’ Arthur record, sealed, big scratch on it! How is it possible?

After this I went and had a small browse in the aisles and found the second, self-titled Third Ear Band’s album (1970). Really great moody Chamber Folk with violin, viola, cello, oboe and percussion. Out there, half jamming, half planned. Check it out on Spotify. I liked it so much that I also played the first album, Alchemy, from 1969.

After that, with all this talk of Portugal, I dug out my Amália Rodrigues albums. Known as the queen of Fado, you really don’t need to understand the words to feel it, share the melancholy, be moved. She died in 1999 at the age of 79. These days contemporary Fado singers I mentioned earlier, Mariza, Moura and Branco, are your chance to experience this emotional music in the modern era. If you get the opportunity don’t pass it up.