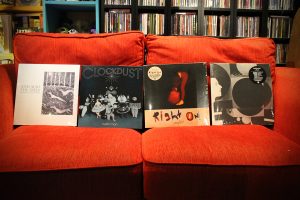 So music today has been very varied CD and vinyl, due to the pottering and filing and sorting. Starting with one of Mexico’s great bands of yore, Los Dug Dug’s from Durango. Mostly unknown outside their home country they made their own special brand of Psychedelic Beat music and thanks to that dastardly internet we can find their records at least on CD and probably on vinyl if you have the cash. This one is from 1971.

There’s a very sweet album called Analog Man by Joe Walsh released in 2012. It’s so lovely and sincere that you have to smile when you hear it. As always with Joe the guitar sounds and playing are really great and his unique voice gives it that familiarity. Produced by Jeff Lynne (you can always tell), Ringo plays drums on a couple of tracks. A great album for the uncynical.

I have all of First Aid Kit’s albums. Olivia and I saw them in Texas and when I worked at Pet Sounds in Stockholm they came and played on RSD. It was a thrill to stand right next to them as they sang their magnificent harmonies – beautiful. This is their first album Drunken Trees (2008), still developing, but a promise of things to come. I can only recommend everything they do.

Then there’s U2 and Songs Of Innocence (2014). I try and try and sometimes succeed in liking some of the songs on later U2 albums. On this one especially Every Breaking Wave, but it sounds a little lacklustre in the energy department to me. Not that energy is what I need from U2, what I need from U2 is the passion that the none Bono lovers don’t like. I never thought you could fault him on effort. The Edge, samey, I don’t know, a certain blandness going on, fine for pottering, but even Morrissey does current affairs better than Bono these days and Coldplay sound a little edgier. I blame Danger Mouse. I feel the same way about his album with Karen O – Lux Prima. Still, I will try again.

The three girls in boygenius (2018) are Phoebe Bridgers, Julien Baker and Lucy Dacus. I have their collaboration EP on vinyl, but my stereo isn’t set up to play 45RPM, this is when Spotify comes in handy. Check it out. But tonight I was playing the solo albums by Phoebe, Stranger In The Alps (2017), and Julien, Sprained Ankle (2015). I’m particularly fond of Phoebe at the moment, really like this album. I’ve had it for a while, played it quite often, Julien Baker I’ve only heard once and that was tonight. So more listens needed. Highly recommended US singer-songwriters. Lucy Dacus also has a cool album, Historian, from 2018.

So who is Israel Nash? I’m not sure really. He’s also been called Israel Nash Gripka. This album Lifted (2018) is kind of Hippie Lush. Melodic, well produced, if he was already famous people would really like this album, ha ha. Maybe he is very successful in America, I don’t know. Other records I have heard by him sounded very Neil Young like, more simple, less produced. I have Barn Doors And Concrete Floors from 2011. You’re just going to have to press random play on your music service to hear him, to see if you like him, but I recommend you do.

Then there’s Margaret Glaspy, singer and electric guitarist. I’m not sure why she’s not more popular, perhaps she’s just too new. But like Israel Nash, perhaps she is popular, I really wouldn’t know from here. This album is Emotions And Math and is from 2016. I really like it. Her new album Devotion (2020) I’m yet to explore. On a sad note each of her albums on vinyl are nearly £30 each, ridiculous, and why?

Moving right on to vinyl. I bought the last And Also The Trees album, Born Into The Waves (2016), direct from the band. Nice note back from guitarist Justin Jones. Really good, moody, dark, atmospheric, as all their albums are. Always interesting lyrics from brother Simon Huw Jones and Justin’s effected guitar creates perfect moodscapes as a background to the evocative words and singing.

Next was the new Rustin Man album, Clockdust (2020). You have to like his singing but I do. It’s quite unusual, moody, intriguing, sometimes a bit Robert Wyatt. I’ve only played it once so far, but I liked it immediately.

Next came Jenny Lee Lindberg’s Right On (2015). She is the bass player in Warpaint who I love and like her band mate, guitarist Theresa Wayman, has released her own album. You can tell they are in the same band, they tap into something, it’s hard to put your finger on it, but I really like the mood and the sounds.

Last but not least Vanishing Twin’s odd record. I’ll add a quote from Wikipedia as to what they sound like: “Their sound has been compared to the band Stereolab and is described as Brazilian psych-jazz as well as a psychedelic, experimental pop ensemble”. Last thought – Do the very rich have record collections? 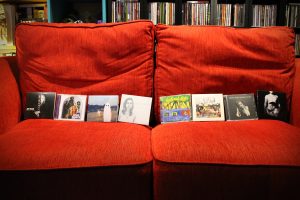