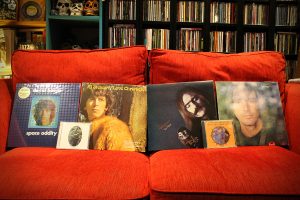 Music today has been 1969 (mostly). Tony Visconti has remixed Bowie’s first album and called it Space Oddity. I bought it in Liverpool in the HMV Black Friday discounts and only just got to it today. That was an expensive day because there were lots of records that were 20% off that I wanted. You just end up spending way more than you would have done overall. This might have been the first time that I heard the name Hermione (Letter To Hermione) before J. K. Rowling came and made it a household name. I was enjoying Wild Eyed Boy From Freecloud tonight.

Same year, Keith Christmas (real name) released his album Stimulus (CD). He played acoustic guitar on Bowie’s album. Sometime in the seventies I saw him live at Liverpool Stadium. It might have been supporting Hawkwind? Stimulus suffers a little from the era and the ‘jolly vaudeville’ as All Music Guide calls it, that appears way too early on the album (Bedsit Two-Step). But there really are some cool tracks on this record, you just have to wait for them. Track 1, Travelling Down, is a contender and also the longer Trial And Judgement.

In 1969 the concept of the groovy bedsit came to the fore with all kinds of Bohemians in furry jackets buying guitars and retiring to their rooms with beautiful long haired girls, tea and funny cigarettes. Al Stewart’s first album was called Bedsitter Images. His second, Love Chronicles, was released in 1969 and has lots of an uncredited Jimmy Page playing electric guitar with long wordy songs. Highly recommended. I met Al Stewart in San Juan Capistrano in California when I went to see him there. When he heard that a member of the ex band was there he wanted to meet me – he lived in California and I guess he had a radio. He told me that before John Lennon, Yoko Ono was his girlfriend.

The late Duncan Browne who died tragically of cancer at the age of 46 made Give Me Take You in 1968. (I have a CD.) Unlike most of the other British bedsitter, singer, guitarists, he played nylon string guitars. (Although Bowie was heavily into the 12 string.) Again wordy thoughtful songs. Colin Blunstone told me that they shared a flat in Earl’s Court. In 1972 he had a hit with the song Journey, played on acoustic nylon string guitar. My friend Ed Rogers recorded the song Alfred Bell from his first album and I played bass on it (I think) at Tony Shanahan’s studio somewhere in New Jersey. (He’s Patti Smith’s only constant musical companion these days.)

Next and back in 1969, Roy Harper and Folkjokeopus. It’s worth it just for the 18 minute McGoohan’s Blues, great lyrics and great singing. She’s The One – also great. If you haven’t brought Roy Harper into your life yet, stop everything and do it now, there’s a lot to get through.

Jake Holmes’ self-titled album from 1969 was his third. You know about the original versions of Dazed And Confused that appeared on his first album, The Above Ground Sound Of Jake Holmes (1967). I always wondered was he trying to separate himself from the hip underground with that title, or was he just being clever-clever? By the time he got to this album he was in Nashville and not afraid of a Country influence, but there’s some good songs on the record. After this album he went on to co-write (with Four Season’s Bob Gaudio) all the songs on Frank Sinatra’s Watertown, sadly it didn’t really work out commercially, the album not making the US Top 100, still, imagine.