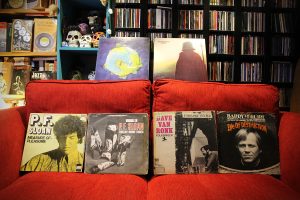 Music today was trying to find solace in old faithfuls after a trying day of complaints and a busy day of music. I also recommended this album to Doug. It’s Argus by Wishbone Ash from 1972, a seventies classic with great songs and harmonies and lovely twin guitars.

Yesterday in a session with Brian in Florida, Yes came up, so that seemed like a cosy listen and so I dug out Fragile (1971). Never gets old. Great artwork, a Progressive classic.

But then a change of mood in Barry McGuire’s 1965 hit album Eve Of Destruction with its topical self-titled P.F. Sloan penned No.1 single. Sloan wrote hits for Herman’s Hermits (A Must To Avoid), Grass Roots, The Turtles, Mamas And The Papas, The Searchers. He wrote Secret Agent Man for Johnny Rivers that became the theme tune for Patrick McGoohan’s Danger Man, precursor to The Prisoner. His real name was Phillip Gary Schlien (the F stood for Flip). Jimmy Webb wrote a tribute song called, wait for it, P.F. Sloan in 1970. (Covered by Rumer in 2012.)

Twelve More Times was P.F. Sloan’s second album, released in 1966, Measure For Pleasure was his third album, released in 1968. Meaningful songs of the period that stand strong today. Somehow Tim Buckley, Harry Chapin, Don McClean, Gordon Lightfoot’s careers had more longevity probably because of hit songs written by them or recorded by others. In Tim Buckley’s case interest was revived due to Jeff’s genius and tragedy. McClean and Lightfoot will always be remembered by somebody for their classic hits, American Pie and Vincent and If You Could Read My Mind, The Wreck Of The Edmund Fitzgerald and the Dylan covered Early Mornin’ Rain and Tim Hardin for Reason To Believe and If I Were A Carpenter. Chapin for WOLD, Taxi, Cats In The Cradle. But as Dylan gets the Nobel prize, Dave Van Ronk (known as the Mayor Of MacDougal street and a Dylan influence), Phil Ochs and hundreds more wonderful singer-songwriters, Folk singers, protest singers, need to have their spirits kept alive and like them P.F. Sloan demands your attention. Highly recommended. (And don’t forget John Prine who died of corona!)