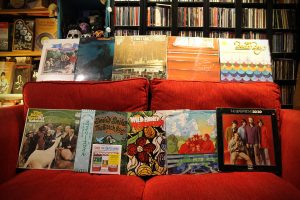 I find inspiration in contrasts, contradictions, opposites. I find great work where it’s not supposed to be and even lesser work in high places. A slight mention of Surf in Newquay, Cornwall, might look like some kind of pointer, but it came way after The Beach Boys albums were spinning their way across the turntable.

Between 1966 and 1973 The Beach Boys released 8 albums, some of which despite their quality and due to trends at the time were their worst selling records. Most probably like The Bee Gees albums post sixties and pre high wasted pants falsetto. These albums were:

Throughout these records are amazing songs, unbelievable harmonies, groundbreaking production, huge hits and ignored masterpieces, but all post their Surf band image and reputation, the turning point being Pet Sounds. It’s up to you to find this out for yourself, or not. And then there’s Smile. In 2012 they reformed as well as they could with Brian Wilson, Al Jardine, Bruce Johnston, Mike Love and David Marks, to make That’s Why God Made The Radio. Sadly by this time both Carl Wilson and Dennis Wilson had died. Ignore The Beach Boys’ genius at your peril.