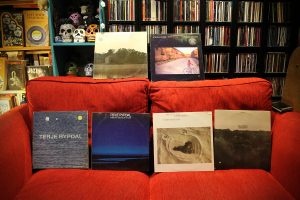 I was distracted today by records from the ECM label. Modern jazz fans love ECM, it was founded in 1969 by a German aficionado called Manfred Eicher who saw the need for this outlet and turned it into a stylish and sophisticated home for artists who were not going to be topping the charts. The cream of latter day Jazz players, especially from Scandinavia, are on this label. The cover art to all these different artists usually followed an ECM mood theme. The records were quite different but the same – to outsiders, in the same way as my parents thought that Hawkwind and Black Sabbath sounded the same, in the same way that we thought that my Mum’s swing records sounded the same. It’s a genre and in this genre there are often different instrumentalists as the leader. It can be sax or guitar, bass or piano, flute or trumpet. For every potential bland Jazz record there’s many challenging and inspiring works and in Modern Jazz a lot of those lie here.

We started with Arild Andersen’s quartet, he is Norway’s most famous bassist. Then we went to Art Lande and Rubisa Patrol, he’s an American piano player. That album also featured American trumpet player Mark Isham. Then it was Dave Liebman who is an American sax player. Steve Eliovson is a South African Jazz guitarist and Colin Walcott accompanies him on tabla and other percussion (Walcott also studied sitar under Ravi Shankar).

I have a lot of records on ECM by Terje Rypdal, a Norwegian guitarist that I have cited as something of an influence for some certain aspect of what I do as a guitarist, although I’m as far away from Jazz as you can be. As a listener though, I always keep an open mind.

One last point, there always seems to be a massive imbalance of women in Jazz. Why is that?