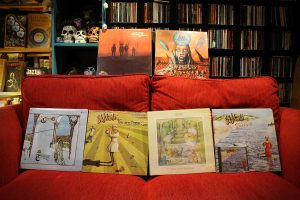 Music today was first fuelled by what came through the post. There was a copy of the debut Strider album Exposed (1973) on eBay, he was asking £9.99 but no one was bidding, I made a £5.99 offer and he accepted it. It’s not the easiest record to find at a decent price and probably not the greatest record ever made either, but it does have a Rock version of Holland-Dozier-Holland’s Get Ready (Temptations).

I did a sesh with Tyler in Portland. He’s trying to move forward with music and I was giving him some advice. He has already made albums, The Sweets Of Mars under the name of Aura Zorba, released in February this year, is his second. His label sent me a vinyl copy of it today. It’s like a Psychedelic T. Rex. Check it out, you can find it here.

Then, in celebration of the giant hogweed story I listened to those four amazing Genesis albums: